At my last visit to Vincent’s over four years ago I was not impressed with the Vincent Burger. But four years later I am glad I returned because the burger I recently ate was one of the best burgers I have eaten in the Twin Cities.

To start my lunch I ordered a Caesar salad. It was a standard salad with lettuce, croutons, a single anchovy filet on top plus an interesting addition, diced tomato, all topped with a sprinkling of grated cheese. It was lightly dressed and good, not great nor memorable.

But I was interested to either confirm my previous impression of the hamburger or enjoy what others have told me is one of the best. I was both excited and cautiously optimistic when it was placed in front of me. The Vincent burger is a unique combination…a double-patty of ground beef is wrapped around braised short rib and smoked Gouda cheese; served on a brioche bun; it is a haut cuisine version of a Jucy Lucy. It arrives open faced with French fries. The burger patty was on one side of the bun that contained a thin layer of “special sauce” and the other half is topped with lettuce, tomato and raw onion. The ground beef was perfectly seasoned with just a touch of salt. The Gouda was melted and delivered a creaminess to the burger and then the short rib textures and flavors kicked in. This elevated the Vincent Burger from excellent to incredible. The brioche added a little butteriness to the presentation and the sauce gave a few sour background notes. The burger was incredibly delicious. The fries were not in the same league. They were tasteless, cool and bland, more than likely came from a big frozen bag, deep fried and added to the lunch plates.

Overall, the Vincent Burger is an outstanding combination of flavors and textures and ranks as one of the best in Minneapolis. 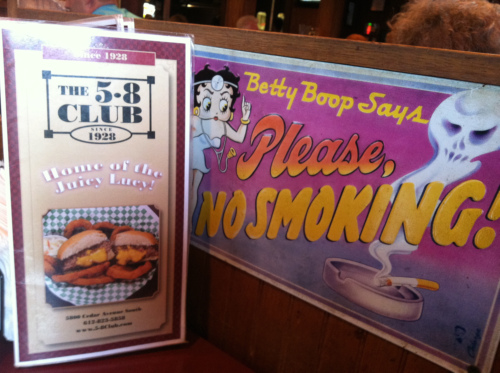 OK, maybe it’s me, but I just don’t get it. After several discussions and disagreements in the office on where to enjoy the best Juicy Lucy, I ventured back to 5-8 Club to see if I could be convinced that their burger was a great choice. This may be heresy to some, but this was not a meal that would make me rush back, in fact, it is more a DNR.

Let’s get to the positives. I think the joint is an incredibly friendly neighborhood watering hole. It is separated into two rooms, one with a bar and the other entirely tables, with the walls teeming with relics of the 40s 50s and 60s. I sat as a solo diner amongst single dads taking their young kids out for a bite, elderly couples splitting French fries and soccer moms racing to that open table. I was now firmly ensconced in pure Americana…a smile came to my face.

The waitress arrived, an energetic and incredibly hard-working high school / college teenager working for car money, college money or just entertainment money. She was great. The menu stated that the JL was 8-ounces, a pretty good sized patty, so my order was a JL with bacon and American, some fried onion straws, which I adore, a hot dog and an Arnold Palmer.

The fried onion straws were excellent. A huge mound of thinly sliced, deep-fried onions (enough for multiple guests) was crispy and perfectly salted. They were so good that there was no need to dip in any ketchup.

Now let me be honest about my view on the JL…the patty was just horrible. There is absolutely nothing positive I can say about the meat. First the size…the menu says “8 ounces” and I would be hard pressed to believe it was more than five ounces. Then the kitchen cooks the doneness to greater than super well done, bordering on incinerated, losing all chance that it will retain any juiciness. And the flavor was tasteless. So the burger meat receives the trifecta, three zeros on taste, preparation and size. And the bacon was a perfect complement to the burger, two meager slices of overcooked bacon. On a slightly positive note, I did like the American cheese, really well melted and with just a touch of pungency. The pickles slices were also a positive; the roll was a pretty basic, what was to be expected in a bar.

Now onto the hot dog. For full disclosure, I am a fan of a Kosher, natural casing dog so this was definitely not in my comfort zone. The hot dog was in the same category as the burger; an oversized, badly prepared  “Ball Park” imitation; it was barely warm, and also served on a basic package roll. One bite and I was finished.

With so many other choices for great burgers in MSP, I would be hard pressed to place this on a top-25 places to have a burger.