On a fateful day in April 2006, Cherry Street East, known affectionately by locals and regulars as CSE, suffered the ultimate catastrophe: It was engulfed in flames and two hours later it was a total loss. Many loyal patrons stared at the ashes of their local pub, their beloved hangout, and the place that served their favorite hamburgers since 1977. 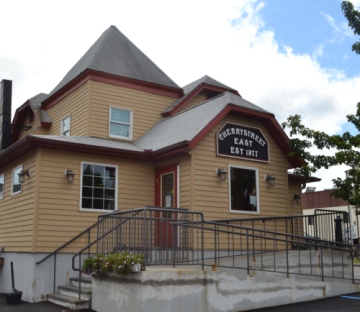 But Cherry Street East was more than just a pub; it was part of the fiber of New Canaan, and fear struck the community. Would CSE become just a distant memory? The owners, John and Mary Bergin formed an alliance with many customers and residents, and together they reconstructed an exact replica and re-opened in 2008.

The first floor is dominated by an L-shaped bar with nine stools and three TVs behind the bar broadcasting numerous sport events, plus CNN or MSNBC. The always-occupied bar serves six beers on tap—Bass, Bud Light, Guinness, Sierra Pale Ale, Smithwick’s Ale, and Stella—with additional choices available in bottles. Surrounding the bar are eight two-person tables plus eight booths to serve an additional 50 customers; if that’s not enough, there’s another dining room on the second floor. The atmosphere is extremely relaxed, engaging, and friendly. The staff has been there for years and treats everyone like they’re a member of the family.

With the structure now rebuilt to its former glory, the big question was, would the legendary burgers return? After several years of enjoying their burgers, my answer is an overwhelming “YES!”

Their eight-ounce burgers are made of hand-pattied 80/20 certified Angus chuck ground daily on the premises. Each of the more than 1,000 weekly burgers is carefully cooked to order on an indoor gas grill. I always order my burgers medium rare and in each instance my burger was received as ordered, plus the server followed up to check if it was cooked properly.

The coarse ground patties have a firm but tender texture and deep beefy flavor. They’re seasoned with a slight amount of salt and pepper and obtain just a touch of smokiness from the grill. The patty was juicy, but not to the point of soaking the bun.

CSE offers 14 predetermined combinations—I recommended the “Vermonster” ($10.50) topped with cheddar and bacon on an English muffin—but the customer can customize their own combination. A bacon cheeseburger ($10.50) at CSE includes two slices of creamy, melted American cheese (Swiss, cheddar, Jack and smoked mozzarella are other options) and three strips of mildly salty bacon, complemented by half-sour pickle chips. By default it’s all encased in a soft Kaiser roll, which tastes better if you ask for it to be grilled. For a more flavorful choice, substitute the roll with an English muffin, whose flavor and texture better complements the beef. I found the roll a little too bland to hold up to the richness of the meat, and I appreciate the crunchiness that the toasted English muffin adds to the burger.

Other toppings include tomato, lettuce, grilled peppers or onions, mushrooms, chili, guacamole, jalapeño peppers, and salsa. Mix and match to your heart’s content, or if you can’t decide, go with one of the pre-constructed burger options. If you prefer an alternative to the beef, CSE also offers a turkey and a vegetarian patty, although not having tried them, I can’t vouch for either. 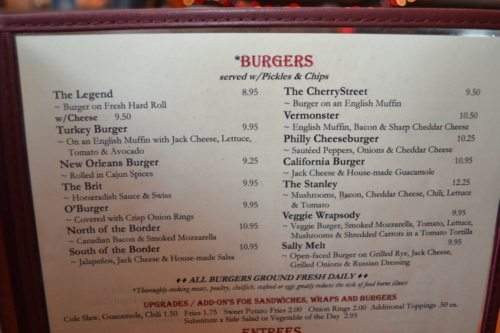 And let’s not forget the burgers’ remarkable co-star: the housemade, hand-cut onion rings, well worth the $2 surcharge. The thickly sliced onion rings feature a crisp breading and onions that are moist and not too sweet. They would taste even better if they were salted immediately after they were removed from the oil, but customers can salt the rings at the table. CSE also serves russet and sweet potato fries; I prefer the sweet potato over the mild russets.

Cherry Street East is a burger destination and after one bite you understand why; the meat has a full, rich flavor, and reminiscent of all the burgers you love when you grill at home. If you are in the mood for a great hand formed burger with a side of delicious housemade onion rings or some fries, then Cherry Street East will satisfy those cravings.

This was posted on seriouseats.com today as my first contribution to A Hamburger Today:

Olio – [oh-lee-oh] (noun) – a dish of many different ingredients

Olio Restaurant, off the beaten path in the Springdale section of Stamford, represents the epitome of a “Hidden Gem.” Located in the space that formerly housed Bella Luna, Chef/Owner Steve Costanzo and his business partner Moira Hyland bring over 36 years of experience to this underserved neighborhood. After two months, the residents are viewing Olio as their local culinary answer to downtown Stamford;

Hyland is a graduate of the Chef’s Training Program at The Natural Gourmet Institute for Health and Culinary Arts. The duo brings their passion and energy to create an eclectic and inviting menu and environment to their dream restaurant. When I asked them what attracted them to this location, Hyland told me “When we first saw the location… we fell in love with the layout and the fact that the open kitchen made the space so inviting and intimate.”The fifty seat interior was completely redecorated and the result is an inviting space that is divided into two dining areas with marble topped tables separated by a long marble bar overlooking the kitchen. Exposed beams under the skylight add charm to the minimalist style of the space. The menu offers a diverse selection of pastas, meats, fish, and poultry with a strong Columbian influence from Costanzo’s wife, Mayte.

Costanzo’s talent was immediately apparent when I visited Olio one afternoon for lunch. The roasted and shredded pork Torta (Mexican variety) with avocado, Chipotle mayonnaise, roasted tomato and arugula, served on a Ciabatta roll was impressive. The slow roasted pork was delicious, moist, and flavorful and the peppery arugula and the sweet, roasted tomato perfectly complemented the pork. The mayonnaise brought just a touch of spiciness. This was my first taste of Costanzo’s culinary talent and the reason that I returned to Olio for the other dishes. 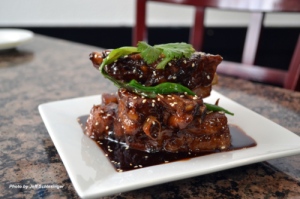 My favorite appetizer was the BBQ Spareribs.  The ribs were first braised for almost two hours and when they emerged from the moist braising process, they were finished with the miso soy BBQ sauce that was comprised of raisins, star anise, and plum wine. The “tower” included five ribs that were fall off the bone tender, full of flavor and smothered in Costanzo’s sweet and succulent BBQ sauce (extra napkins required). The dish was garnished with sesame seeds and charred green onions.

Another delicious option was the Wild Mushroom Crostini. Costanzo’ recipe began with a duxelle of cremini and shitake mushrooms to which he added diced caramelized cippolini onions and roasted garlic. When assembled he melted a small amount of Taleggio cheese on top.  Presented as a trio with the arugula and a touch of truffle oil, this dish presented great flavors and was a delightful way to begin the meal. 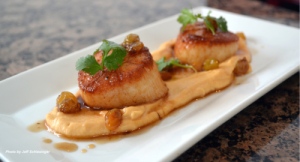 The Seared Sea Scallops served atop a smoked cauliflower fondue and complemented with sweet and sour golden raisins was another excellent choice. The two large scallops were perfectly seared and Costanzo added Sherry vinegar to offset the sweetness of the raisins. If, like me, you prefer a little more saltiness to your dish, be prepared to add just a little salt to the cauliflower fondant to bring out more of the cauliflower’s natural goodness.

The House-Made Ricotta Gnocchi, served with lobster and finished in a brandy cream sauce was my favorite entrée. The gnocchi were delicious, with a light, soft texture; the lobster was perfectly cooked and Costanzo added a few sweet grape tomatoes to bring the various flavors together. This gnocchi dish created a great combination of flavors with the creaminess of the sauce and the delicate texture and flavor of the lobster meat and grape tomatoes.

Another excellent choice was the Beef Short Ribs with truffle mashed potatoes that were served with an Ancho chili and tomato confit. The sauce exploded with flavors and the ribs were braised until they were fork tender while maintaining their integrity. The sauce’s flavor was enhanced by Costanzo’s braising stock which included plum tomatoes, veal stock, red wine, roasted red and Poblano pepper plus a touch of cinnamon. Overall this dish delivered outstanding flavors throughout.

Please save room for Costanzo and Hyland’ special dessert, the Cinnamon Sugar Dusted Donuts, served with a Nutella dipping sauce. The donuts were some of the moistest versions I have tasted and when I asked the chef the secret to this incredible texture, he reluctantly told me, “ricotta.” No longer a secret ingredient and no longer a secret dish, I expect that the donuts will become a staple at Olio with every-changing sauce accompaniments being offered in addition to the Nutella.

Other desserts were available to satisfy the sweet tooth. The bread pudding with a bourbon crème Anglaise sauce was a very good version, but I would have preferred a little more cinnamon and sauce and the warm almond fudge torte with Grand Marnier served with house-made vanilla bean ice cream and raspberries, was more a brownie in texture, but very tasty.

After a few months, Costanzo and Hyland are very pleased with the response from the guests and the neighborhood and they are excited about expanding the menu and developing a deeper relationship with all who enjoy their cuisine and hospitality. “We love the neighborhood and all the support we have received from the community.”