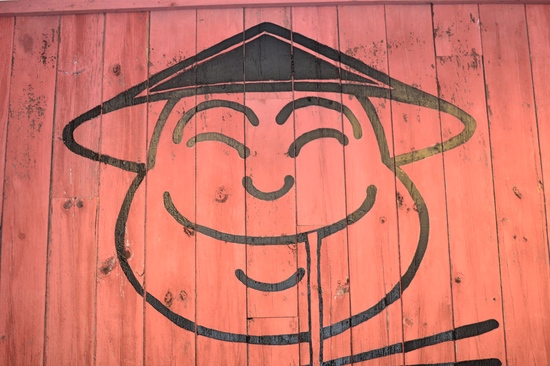 The official opening of Nom-Eez, Chef Matt Storch’s new Vietnamese street food storefront, in the Blackrock section of Bridgeport occurs today. As reported by CTbites, joining Storch for this new project are his partners from Match, Jason Wojnarowski (owner of the epically delicious Donut Crazy), and Susan McConnell. CTbites was invited to a sneak peek preview to sample some of the menu and a few donuts. 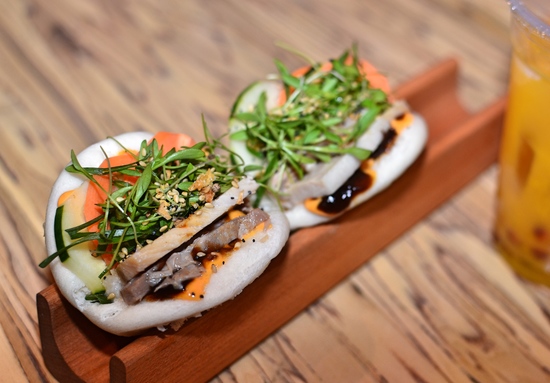 The menu is divided into three sections, “snacks,” “noodles” and “a bit larger.” The space is small in size, with only eight brightly colored red stools, and the flavors are equally bold and bright and engulf you in the traditional cuisine of Vietnam. 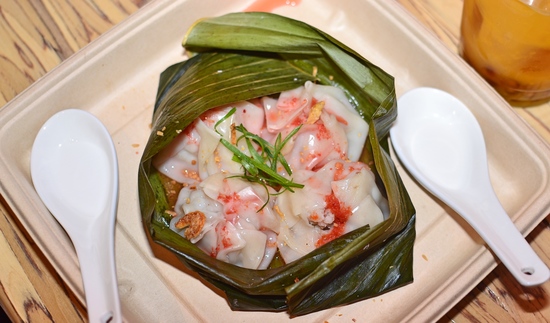 The Soup Dumplings were my favorite of the visit. Four dumplings were filled with pork, served in a rich bone broth and finished with a red vinegar splash. These were spectacular. The other “snack” that we really enjoyed was the Nom Nom Buns. Two steamed buns were filled with braised pork, cucumber and carrot slices, spicy mayo, hoisin sauce, cilantro and “everything” spice. The buns were also filled with big, bold and delicious flavors. 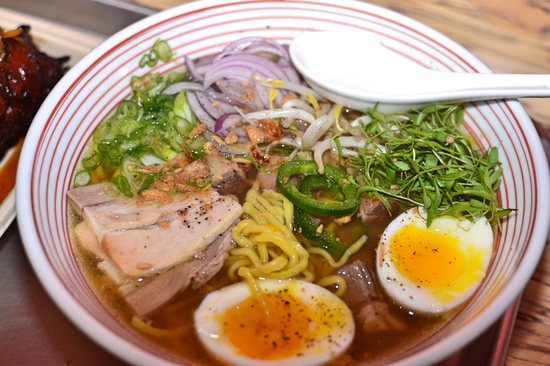 We moved to the “Pho-Ramen” as our noodle selection. Nom-Eez prepares a traditional Vietnames Pho, which features floral notes and flavors. The beef broth is developed over several days and then lightened with the traditional Pho accents, cinnamon, cardamom and ginger. It also features a perfectly prepared egg, peppers, cilantro and onions. The result is a mild broth, with the ramen noodles and the other ingredients adding texture to complement the sliced beef. 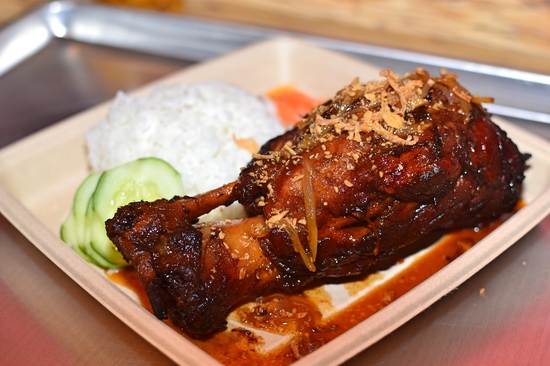 I was very interested in the “Coconut Braised Pork” and was glad I ordered. It was served with steamed rice, crunchy onions and garlic. The meat was fall off the bone tender, moist and incredibly flavorful, and the glaze was delicious. Using chop sticks to pull the meat from the bone was an easy task.

The restaurant also features selection of Wojnarowski donuts. I sampled the Boston cream, maple bacon and Nutella filled. Each was delicious with great combinations. This is a great way to start the day with a cup of Non-Eez’s Vietnamese coffee, breakfast sandwiches, and of course pho and congee starting at 7AM.

Overall the menu presents a wonderful array of traditional Vietnamese cuisine in a small storefront. I look forward to returning to enjoy many more of these delightfully fresh and subtle flavors of Vietnam. 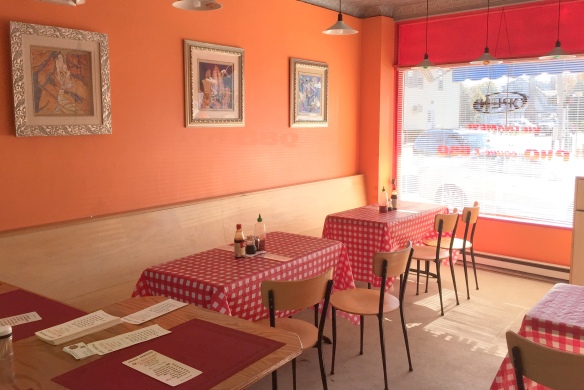 Q’s Viet-Pho restaurant opened recently in the former location of Valencia’s on Main Street in Norwalk and after reading the review at CTbites I decided to try the Pho.

The interior of the restaurant is very utilitarian. With 7 red topped diner-like bar stools and four tables that seat four, covered in red-checked plastic picnic table coverings, the interior is the backdrop to enjoy the food, not a destination décor. Bottles of Hoisin and Sriracha sauce sit on each table. 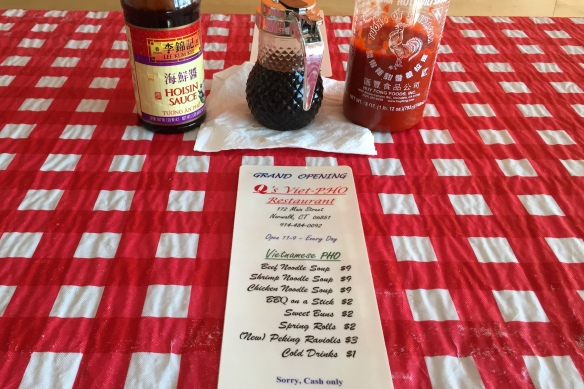 The menu is very limited, beef, chicken or shrimp Pho (each priced at $9), BBQ on a Stick, Sweet Buns or Spring Rolls (each $2) or Peking Raviolis ($3).

I ordered the beef pho and a spring roll to go. While I waited I chatted with the husband. He was Marine in Viet Nam 40 years ago, fell in love with the food. His wife is from southern China and has always yearned to own a restaurant. They decided to “give it a shot” and start with a small menu.

The pho was packed in two containers. The soup with the noodles in a large plastic container and the other ingredients in a paper “Chinese Take Out” container. When I returned to my office I opened the latter and it contained carrots, cucumbers, cilantro, raw onions, lime wedges and thinly sliced beef (not raw but slightly cooked). I added all but the onions to the broth and allowed them to simmer.

While the vegetables and beef simmered I tried the spring roll. It was about four inches long, thin and fried to a golden brown, more Chinese than Vietnamese. It was delicious with a sweet interior and an exterior that reminded me of fried phyllo versus thick Chinese exterior. I wish I would have ordered two versus one.

I tasted the Pho and it was full of deep, multilayered flavors, great umami notes. The noodles were perfectly cooked, soft with a bit of bite and the meat was flavorful. The cilantro added fantastic flavor and was the perfect complement to the other deep flavors.

Overall the food at Q was delicious. I will definitely return to try the other Pho options.

Overall the food at Q was delicious. I will definitely return to try the other Pho options.

During the year I enjoyed hundreds of courses in Connecticut and on my travels. With all of those flavors and textures, it was an incredibly difficult task in choosing my five favorite Fairfield County dishes for 2013. In fact, I did not since I couldn’t whittle the last one from this list, so it is six, plus three special categories.

Here are my favorite dishes from 2013:

Top Hamburger – The Whelk – Over 70 hamburgers comprised my 2013 Hamburger search and The Whelk’s hamburger was my favorite. Full of rich flavor, encased in a great bun and topped with some great cheese, onions and house made pickles.

Top Bolognese – Cava Wine Bar – My colleague at CTBites, Lou Gorfain, and I scoured lower Fairfield County for our Bolognese round-up and my personal favorite was Cava’s Gnocchi with Bolognese. What set this apart from the others was the soft, ricotta gnocchi that were pillows of deliciousness.

Top Pizza – Locali – This newcomer uses age-old pizza-making techniques, San Marzano DOP tomatoes and house made mozzarella. The flavors, texture and the perfect amount of char from the wood burning oven produce some of the best Neapolitan pizza this side of the Campo dei Fiori.