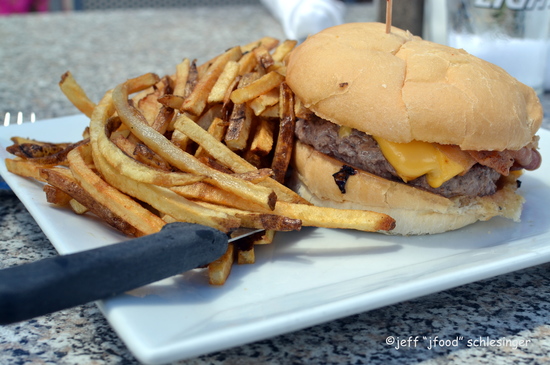 The Best of the Gold Coast Awards were announced recently and one of the areas of personal interest was the winner in the Burger Category. When I saw that Flipside was this year’s winner I immediately placed this venue to the top of my must-try list. I visited a couple of years ago and it never made my “Best of…” list so I was curious if the burger was different from what I sampled.

Flipside is located on the Post Road slightly east of Brick Walk on the south side of the street. Parking is located in the lot behind Ring’s End. There is a long bar, indoor tables and booths plus seating outside for 40-45 guests. It was a beautiful evening so I decided the terrace would be a great way to enjoy a burger.

Burgers are very much front and center at Flipside. There are sixteen predetermined combinations or guests can mix and match from 9 “meats,” 27 different toppings and a variety of 12 sauces. “Meats” include beef, fried chicken, ahi tuna, turkey, salmon and that ever-present veggie burger. I would caution ordering some of the pre-determined offerings as you can save a little money if your order the same combination a la carte. Just check.

I ordered a 6-ounce beef patty (medium-rare) with bacon and American cheese. Fries are included and I decided to keep it simple with regular fries, versus substituting (for a small fee) with sweet potato fries or onion rings.

When the burger arrived I cut it in half and was a little disappointed that it was more raw-rare than medium-rare. The meat had a decent flavor but nothing outstanding. There was no char whatsoever on the exterior and the kitchen forgot to place any seasoning on the patty. The bacon was well cooked and delivered just a touch of saltiness. The cheese was generous and well melted. The bun was in the same category as the other ingredients, basic and it was not grilled, straight from the bag to the plate. The other item of note was the burger tasted as if it was cooked on the same griddle as the onions, there was a significant oniony flavor on the meat.

The shoestring fries were also basic. They were somewhat greasy and most of them were limp, plus the seasoning was extremely inconsistent.

Overall it was an OK burger in an area that has numerous burgers that I view as better options. With all of the votes that Flipside is serving the best burger around I had high hopes and was disappointied.

The First Runner Up for Best Bar Burger after tasting close to 70 different variations in restaurants comes from a haunt that is know for serving one of the best hot dogs in these parts. But as I stood in line one day I saw a little sign for “The Natural” and decided to give it a shot. And boy was I pleasantly surprised, it was absolutely delicious.

The “Natural” burger was 6 ounces of delicious chuck and sirloin from Newtown’s Butcher’s Best Market. Owners Gary Zemola, John & Lorin Pellegrino created a very distinct flavor in the meat and the kitchen perfectly seasoned the patty. It was served on a bun from Chaves Bakery (plain or potato depending on the season) that allowed the flavor of the burger to shine. The grill-master cooked it to a perfect medium-rare. The bacon and cheese were excellent additions. You may also want to try one of Zemola’s house-made toppings (recipes are the same for over a decade) to add other great flavors and textures. 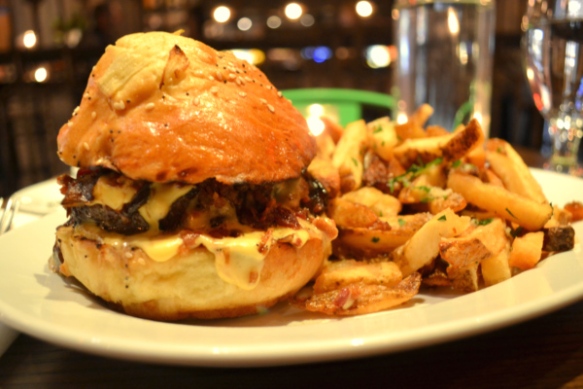 When I heard that Matt Storch, the chef/owner of Match in South Norwalk, was opening a more casual sister restaurant in Fairfield called The Chelsea, I was excited. I’ve enjoyed many meals at Match, and the combination of The Chelsea’s more casual atmosphere and menu plus Storch’s talents should be a winner.

The Chelsea has seating for 80, whether you want to grab a drink in their English-style pub area featuring a long wooden bar with about a dozen seats, or sit at a table in their airy and inviting atrium. Their menu includes a wide variety of gourmet bar-food options plus eclectic and fusion dishes, all under $25. It offers two burgers: the Salt and Pepper Burger ($12.95), a plain and simple char-grilled patty on a seeded brioche bun, and the Chelsea Burger ($13.95) featuring a “cheddar dip,” sweet-sour onions, and chopped bacon on an onion brioche bun from Good Bread Bakery in Port Chester.

The hamburgers at The Chelsea are definite A-Listers. I ordered each medium-rare and the kitchen complied with perfectly grilled patties. The burgers came pre-cut—not as ordered, but as done to all of their burgers. When I asked about the pre-cut process, I was told, “We like the customer to see the meat and the juice.” Separating the halves revealed a promising pink interior plus a coarse, tender grind.

The meat is a 75/25 blend of chuck, brisket, and short rib from local organic purveyor Saugatuck Craft Butchery that is dry-aged for two weeks. The seven-ounce burgers are ground with an extra-coarse die and hand-pattied each morning and again before dinner. The gas-fired grill imparts a crispy char on the exterior, while the coarse, loosely packed interior stays juicy.

Since there aren’t any toppings on the Salt and Pepper Burger, it’s all about the flavor of the beef. And aside from being neither salty nor peppery, it succeeds with pronounced smokiness from the grill and a deep, rich, beefy flavor. The burger is served on a toasted seeded brioche bun that makes the meat-to-bun ratio a little heavier on the bun side, but the flavors of the meat balance well with the buttery brioche bun.

The Chelsea Burger elevates the basic burger with the addition of numerous toppings—cheddar dip, sweet-sour onions and chopped bacon—and a switch to an onion brioche bun. I was concerned that the flavors would fight each other, but they work in perfect unison. The cheddar isn’t just a few melted slices but a complete cheese-wrap due to the finished patty getting dipped into a bacon-cheese Béchamel sauce before being placed on the bun. The crumbled bacon lends salty-smokiness and crunch while the onions add the desired onion flavor improved with a kick of sweet and sour, plus a soft texture that complements the crunchy bacon bits and the patty’s char. Everything balances perfectly with the bun’s soft texture and buttery flavor. This is one of the most flavorful combinations of meat, toppings, and bun in the area.

The accompanying fries were very good—crispy on the outside, moist and soft on the inside, and well salted. They come sprinkled with Parmesan cheese for more saltiness and parsley that added more color than flavor. I enjoyed the fries more with the Salt and Pepper Burger than the Chelsea Burger—maybe the additional flavors presented in the latter were a little too powerful for the fries.

For a delicious basic burger the Salt and Pepper Burger is a great option, but to truly appreciate The Chelsea’s burgers, go for the Chelsea Burger.

This review was originally published on A Hamburger Today on January 10, 2013 at http://aht.seriouseats.com/archives/2013/01/the-chelsea-burger-review-fairfield-ct.html?ref=pop_a_hamburger_today