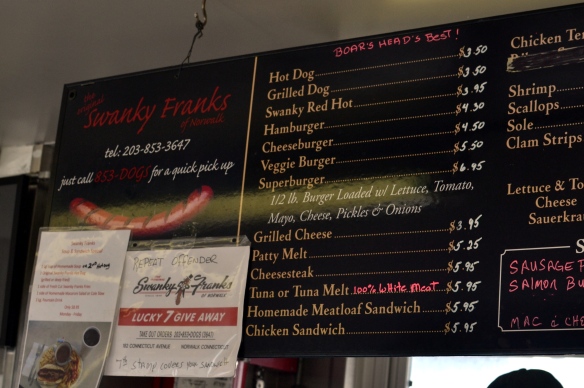 Swanky Franks has been serving dogs, burgers and fries for decades. The search for a decent dog in Fairfield County has been difficult. They serve Boars Head and offer hot dogs, grilled dogs, Swanky red hots, a variety of burgers and sandwiches, and fried seafood. A basic dog is $3.50. 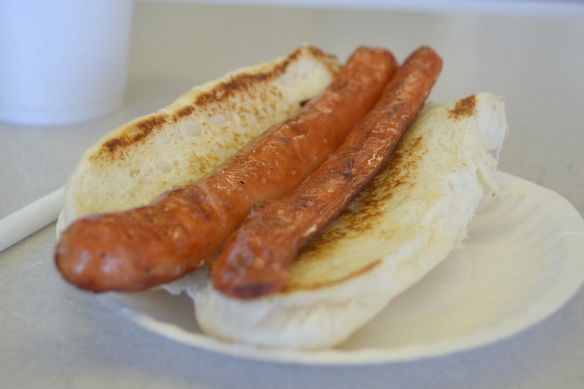 I sat at the counter and ordered a single dog and an iced tea. The server was friendly and pleasant, a throw-back to those seen on sit-com diner servers of the 60’s. I asked her for the men’s room and she giggled a little and told me it was around back “still in this building, but outside.” Granted this is a side of the road dog and burger joint, but it is 2014, not 1955 and that may have been the last time the bathroom was updated. I was not going to touch anything, and I now understood why the server giggled. Disgusting is upside.

When I returned to the counter, the dog was already sitting in front of my iced tea. It almost looked lonely sitting naked in a bun on a paper plate, but since I did not order any toppings, it was what I ordered. It was split down the middle. I added a little mustard and green relish. My first bite was a disappointment. There was very little flavor in the dog. This about as basic a dog as one could imagine.

What was more disturbing was watching the cook. He did not wear gloves and as I watched him prepare other orders he would grab raw bacon, then grab a few slices of cheese and then the rolls, all without washing his hands.

Swanky Franks is what it is and I understand it is a side of the road dog place, but nostalgia did not win my heart and stomach.