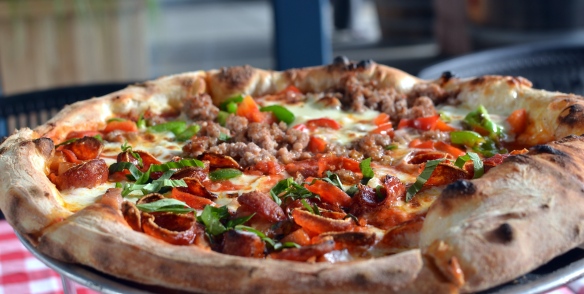 It has been a few years since I visited Coalhouse; It was during its opening weeks. I was impressed by the lightness and flavor of the dough (the original dough maker was from Red Hook in Brooklyn) the sauce and the delicious toppings.

I sat on a beautiful evening at a table outside watching the crazy drivers jockeying for a parking spot. It was early in the evening, there were very few other guests and I ordered a 12” pie with half sausage and pepper and the other half pepperoni and bacon.

When the pizza arrived the first thing I noticed was manner in which the pizza maker constructed the topping. There was a various clumps of cheese and a clumps of sausage, tons of teeny pieces of sausage, scattered diced red and green peppers and a smattering of bacon cubes. It appeared that the pizza maker was either in a rush or did not care about the final product 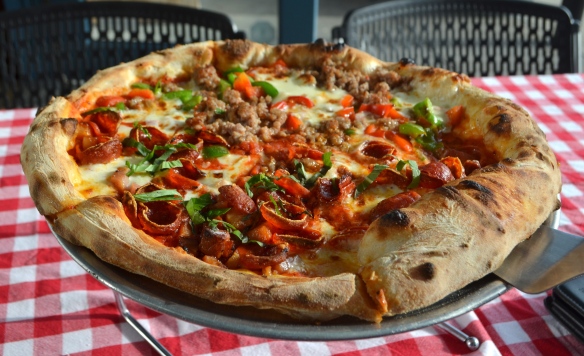 The crust was nicely charred. I lifted to look underneath, again nicely charred. Then I saw the first item of concern, holes in the dough, some of the dough forced back together after holes were made and then my biggest concern, the crust was soggy, charred and soggy, not a good combination.

I cut the first wedge and tried to slide onto the second plate (my first was dirty and was replaced). A good portion of the topping stayed on the tray.

I tasted the dough. This was a basic flour and water dough with little flavor. Gone was the soft, beautifully flavored crust from my initial visit; and it failed miserably in holding the toppings. I tasted the cheese; it was nicely melted but it was absolutely tasteless. Onto the sausage and it did not improve my impression, it had the texture of sand, and not flavorful. The next item was the red and green peppers. They were still basically raw, and there was no sweetness at all, bad grocery store peppers.  The pepperoni slices were dime sized and so thinly sliced they curled into little salty circles. The cubes of bacon were either pure fat or over-salted cubes. The sauce had a little kick to it and might have been the highlight of the pie, but the bar was not set too high. Overall I cannot say anything positive about this pie.

On a positive note, the server was very good. He replaced the dirty plate, asked if I wanted anything else and was incredibly pleasant during this escapade. As I sat there for close to 10 minutes after the pie was returned I assumed the manager would approach and ask what happened, but no one came by the table. That tells me that the pizza maker and the manager just do not care about the product or the guest. Others may like Coalhouse Pizza, but it will be hard for me to return.