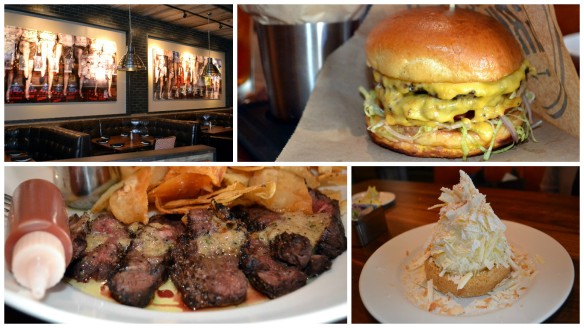 I was invited on behalf of CTbites to a lunch at Del Frisco’s Grille in Stamford, the pubbier version of the nationwide steak house, representing their twenty-second Grille opening and its first location in Connecticut. The main dining area is very open, with its soaring ceiling, reclaimed woods, large murals, and light fixtures with an industrial-hip, NYC vibe. Seating includes tables, banquettes, and a long bar, all with leather backed seats and bar stools. The large open kitchen is situated in the rear of the dining room.

Overseeing the kitchen is Executive Chef Enrique Reyes. Prior to this position, Reyes served as executive sous chef at Michael Jordan’s Steak House, chef de cuisine at Madison Beach Hotel and sous chef at Del Frisco’s Double Eagle Steak House. Since the Stamford location is their “Grille” edition, the menu is different from its sister NYC steakhouse but does include several of Del Frisco’s signature steaks (available, but not advertised, on the lunch menu), plus traditional steakhouse salads, seafood and burgers. When I asked about the vision of Del Frisco’s Grille I was told that the cuisine would offer twists on traditional American cuisine with a focus on creating comfort food. During my visit I sampled three items that are prepared to share and two that would be ordered as an entrée, plus a dessert.

The three sharing plates were the Cheesesteak Eggrolls, the Ahi Tacos and the Spicy Pork Meatball Flatbread. My lunch companion told me the eggrolls were one of the biggest sellers, so I sampled this item first. The fried wrappers encased the beef and cheese combination, cut diagonally and served with two sauces, a sweet and spicy chili sauce and a honey mustard sauce. The beef and cheese was tasty but fought with the fried wrappers. The two sauces did not work with the beef and cheese and the entire dish, although flavorful, was not at all to my liking, more of a fun, novelty item to share on a first visit.

The Ahi Tacos were four small hard shelled tortillas that were half-filled with smashed avocado, topped with Tuna Tartare, and drizzled with Spicy Citrus Mayo. The avocado was bland, absent of any seasoning while the tuna offered some flavor, which was accented by the mayo. The shell made for ease of lifting but quickly split into pieces after one bite. The tuna and spicy mayo complemented each other, but when combined with the bland avocado and the hard shell it was not a dish that I enjoyed.

The flatbread was topped with a Roasted Tomato Sauce, halved Spicy Pork Meatball, chunks of Banana Peppers, dollops of Mozzarella, and house-made Ricotta. The flatbread was very over-baked and we struggled to cut the crust with our knives and the over baking also caused the meatballs and two cheese to lose all of their moisture. The pork was somewhat under-spiced while the small chunks of banana peppers were very good, but haphazardly placed on the flatbread. This was the third, and most disappointing, of the shared appetizers.

Fortunately, the next two dishes were much better. 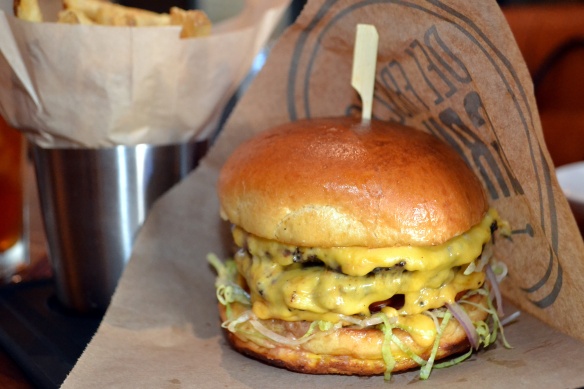 The Grille Prime Cheeseburger included two beef patties, lettuce, tomato, red onion, pickle, and “Sloppy Sauce,” served on a brioche with a side of French fries. The two, thin patties were cooked to well-done, but maintained a good level of juiciness and delivered a deep level of flavor. The abundant cheese was perfectly melted and was a great pairing for the beef and the lettuce and tomatoes added a great freshness, while the paper-thin sliced red onion added a touch of pungency. The brioche added a sweet butteriness. The French fries were well prepared, crispy on the exterior and soft on the interior.

The Grass Fed Hanger Steak was sliced and fanned across the plate, topped with DFG Steak Sauce (Béarnaise-style), frites and a mini-squeeze container of ketchup (I did not like the idea it was placed on top of the steak). The steak was seasoned with salt and pepper and prepared to medium-rare. The flavor of the steak was rich and deep, but was slightly over-seasoned, and the sauce was a nice complement. The “frites” were a combination of French fries, sweet potato fries and chips; all three were very good.

The dessert menu was presented and since I have heard positive reviews about the Coconut Cream Pie, I decided to give it a try. It was excellent. The sweet crust was first filled with pudding, topped with a large mound of whipped cream and topped with shredded coconut. The filling was creamy and delightful and the coconut was a great addition. It was a nice way to end the meal.

Overall I was disappointed in all of the shared plates, they were gimmicky versus appealing. It was no surprise that the meats were rich and flavorful given the restaurant’s relationship to one of the premier steakhouses in NYC, and the coconut cream pie was delicious. The space was beautiful and invigorating but I would be careful in food choices.