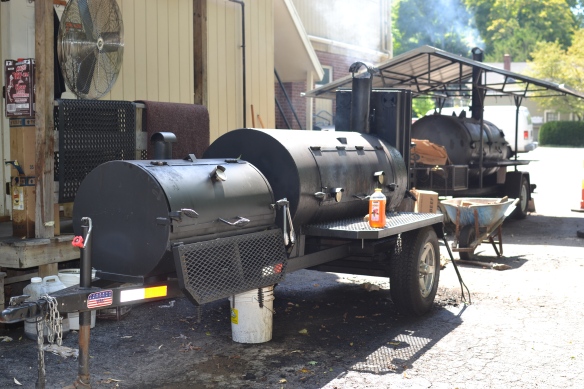 There are eight table outside on the terrace and you continue inhaling the smoke. So enticing that when I ordered the Three Sliders (one each of the pulled pork, brisket and pulled chicken), I also ordered a ¼ slab of baby back ribs.

The three sliders arrived, and the first item I noticed was the amount of meat on each bun. It was a meager portion, maybe one-ounce of meat. The bun was nicely grilled.

The pulled pork was my favorite. It was somewhat moist, with a hint of smoke, but otherwise flavorless. It needed one of the sauces. The brisket was probably 1 slice, cut into sections and placed on the bun. There was a little smokiness that stayed on the palate but also lacked any flavor and sauce was needed. My first bite of the chicken was favorable, it was the moistest of the three meats, but that was limited to the original piece. The other pieces were dry and again, the only flavor was smoke. The other issue with all of the sandwiches was the amount of bread compared to meat. Take together it was a mouthful of bread with a little meat. I finally removed the top bun and ate each open-faced. The sliders were served with a small cup of horseradish sauce, which was full of flavor, but I have no idea why it was included. 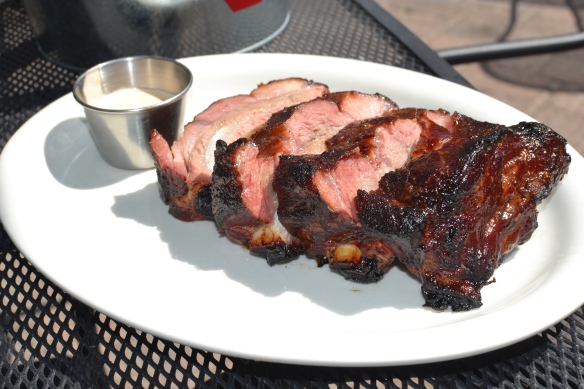 The baby back ribs looked delicious, but looks can be deceiving. They were incredibly moist, but again lack any flavor, barely able to taste any of the rub. Even the end piece of the slab, which was covered in rub, was almost flavorless.

Overall, as much as this is a cute place with great service and two smokers out back, it is not a destination place for BBQ.