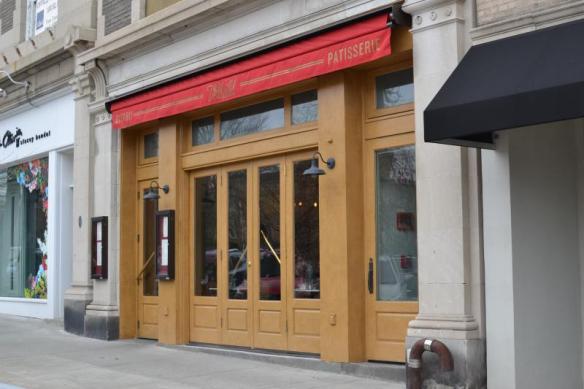 Versailles has reopened on Greenwich Avenue. Considered by many as one of the best patisseries in the area before it closed, this is not a not a mere re-opening but a reincarnation; the new Versaille will not only feature the wonderful pastries that were a fixture on Greenwich Avenue, but the new owners will bring an expanded menu of bistro fare. And the new owner is none other than Marc Penvenne, a former employee of Versaille, who, with his wife Evelyne opened Méli-Mélo, across the street. “We couldn’t let Versailles go” Penvenne said “our goal is to do our best to continue its legacy so we waited to announce our opening and collected feedback from customers.”

Then the couple launched its grand opening menus.

Le Petit Dejeuner includes omelets, granola, pancakes and of course French toast, and do not forget the house-made patisserie items. Versaille’s Le Dejeuner menu offers an array of traditional bistro selections including Croque Madame or Monsieur, salads, patés and escargots or for those with a heartier appetite, Boeuf Bourguignon and Duck Confit.

As nighttime approaches Versailles transforms into an evening bistro with traditional bistro fare. From poached salmon to entrecote, to beef tartare and the ever-present roasted chicken, Le Diner menu will transport you to the streets of Paris. For a lighter meal, guests can order rillettes de saumon, a green lentil salad, escargots or a selection of cheeses or charcuterie. The menu is designed for both the Le Petit to Le Gourmand.

I look forward to checking out Versailles for an in depth look at the rustic country fare and if I happen to enjoy a few pastries as well, c’est la vie.