Primary Food & Drink, the newest member of Master Chef Graham Elliot’s expanding restaurant group, opened in Greenwich this past December under the direction of Executive Chef and Managing Partner Merlin Verrier. The restaurant is serving some of the most innovative and imaginative interpretations of traditional recipes using unique combinations and ingredients. 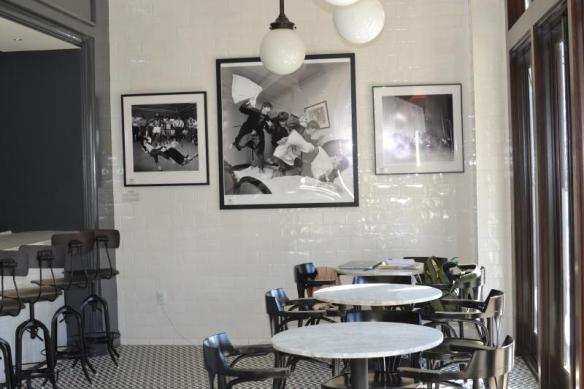 With six Michelin stars in his portfolio, Chef Verrier worked under several of the great chefs in America. His culinary experience included stops in his native California, Oregon and Colorado where he was eventually noticed by James Beard Award winner Chef Jennifer Jasinski and promoted to Sous Chef at her Rioja Restaurant. His travels brought him to Chicago in 2008 where his business relationship with Chef Elliot commenced. One month after joining Chef Elliot, he was promoted to Sous Chef and a year later he was overseeing the kitchen as Chef du Cuisine where he received his first Michelin star. Chef Verrier now brings his magical cuisine to Fairfield County.

To fully appreciate Primary’s cuisine, it is important to understand the philosophy of Chefs Elliot and Verrier, who told CTbites, “We both like people thinking outside the box, a way to add something to this dish. So it’s this non-stop progression of keeping these people on their toes and not being a robot.” This mantra guides the development of the menu and in the construction of each of the dishes. They are not a repetitive series of harmonious bites, each presents a different experience in flavors and textures. Guests need to leave their preconceived notions at the door and vacate their culinary comfort zone to enjoy the complexity of Chef Verrier’s interpretations.

The “Foielipops” are a pre-cursor to the creativity of the food. These are not listed on the menu but ask your server so you can enjoy these delicacies while you look through the menu. Circles of rich and creamy foie gras mousse are trimmed with salmon colored “pop rocks.” Some will burst in your mouth and others add a sugary complement to the richness of the foie gras; this is a fun way to start the meal.

The “Deconstructed Caesar” included three mounds of gem lettuce, topped with a small Spanish anchovy filet, the middle mound sat atop the oft-mentioned “crouton Twinkie.” The crispy lettuce was complemented by a delightfully light and lemony anchioade. The Twinkie offered crunchiness plus a mild creaminess from the interior’s Parmesan cheese “cream” while the Spanish anchovies delivered just a hint of saltiness. There was the slightest accent of garlic and pepper to complete the dish. This was a very light-handed Caesar salad. 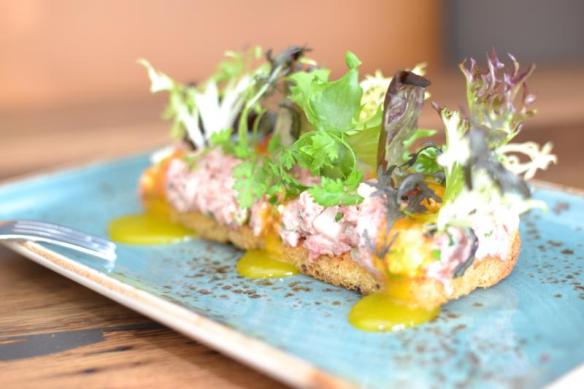 The next dish was the “Beef Tartare” and it delivered a very different profile. The flavors were accentuated by cornichons, horseradish potatoes, Dijon mustard, roasted garlic, and Worcestershire sauce and sat atop a house-made baguette. The richness of the meat was augmented by creamy sous vided egg yolks and then the chef playfully added a sour component with finely diced pickled egg whites. This was a delightful interpretation. 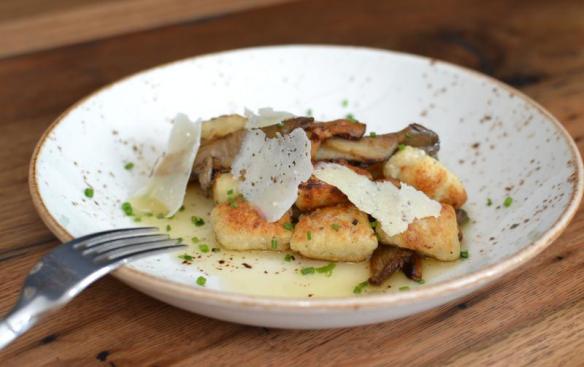 The “Toasted Gnocchi” were delicious. The potato gnocchi were lightened with the addition of ricotta and then crisped. They were the perfect canvas for the flavors and textures of the accompanying ingredients. Sautéed foraged mushrooms added a deep earthiness and the Parmesan Reggiano brought a mild saltiness to the dish. All of these items were nestled in a pool of brown butter that delivered a nutty component and increased the overall richness of this presentation.

We next enjoyed a wonderful “Scottish Salmon.” A flawlessly prepared filet sat atop a mélange of grains, vegetables and fruits including wild rice, puffed rice, organic freekah, Brussels sprouts, crisped salmon skin, d’anjou pear, Brussels sprout leaves and greens; finished with whole grain mustard seed caviar and mustard vinaigrette. This was one of the best salmons I have ever tasted. The fish was crispy and perfectly seasoned on the exterior, and moist and soft on the interior with a deep flavor. The sweetness of the compressed d’Anjou pear, the nuttiness of the freekah, the crunchiness of the wild rice, and the sour and spiciness of the two mustard preparations were a perfect balance to brighten this presentation.

The “Ahi Tuna” was the only dish that I was not fond of. The large filet was coated with a spice rub that included smoked paprika and chili, seared to rare and was accompanied by Plantain chips, plus a combination of hominy, mango salsa and served with whipped avocado and lime crema. The spiciness of the rub overwhelmed the tuna and the other ingredients did not complement each other.

The “Beef Stroganoff” was fantastic with a unique twist to a familiar recipe. Chef Verrier deconstructed each of the major components and then created a delicious rendition of each of the elements. The plating began with rich truffled mushroom purée, topped with crisped spätzle and a few black trumpet mushrooms, topped with a large beef filet and finished with additional black trumpet mushrooms, crème fraiche and thinly sliced pickled shallots. The filet was incredibly rich and tender and when combined with the lushness of the mushroom purée and the earthiness of the mushrooms created a delightful decadence. The spätzle lightened the dish and the pickled shallots added sour notes to balance the other ingredients. 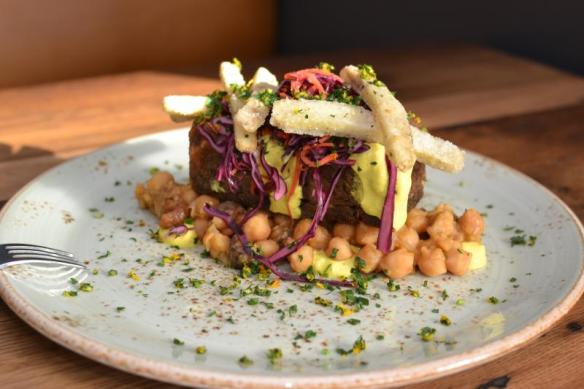 Chef Verrier’s interpretation of “Moroccan Lamb” was outstanding and flawless in its construction and presentation. This was the best dish of the evening, and one of the best I have ever tasted. A mound of shredded lamb sat atop sweet garbanzo beans and topped with a slightly-spiced Harissa accented red cabbage slaw and a few deep-fried eggplant spears. The dish was finished with a sprinkling of orange gremolata. The lamb was marinated in yogurt and then slow roasted for hours resulting in a mild flavored, succulent, fall-off-the-bone, braised lamb. Prepared similar to “baked beans,” the sweet garbanzo beans were enriched with Merguez sausage and accompanied with a few pipings of curry yogurt to complete this North African inspired dish. This interpretation was brilliant. 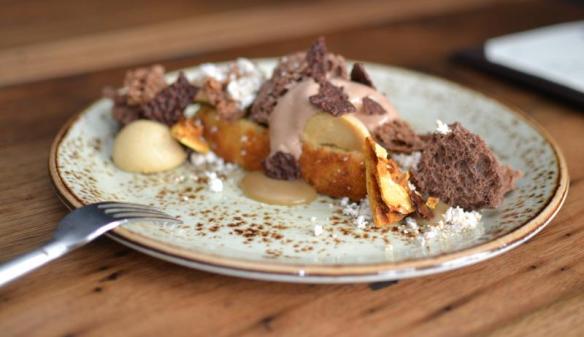 This review was originally posted on CTBites at: http://www.ctbites.com/home/2014/3/2/graham-elliots-primary-food-drink-opens-in-greenwich-outstan.html