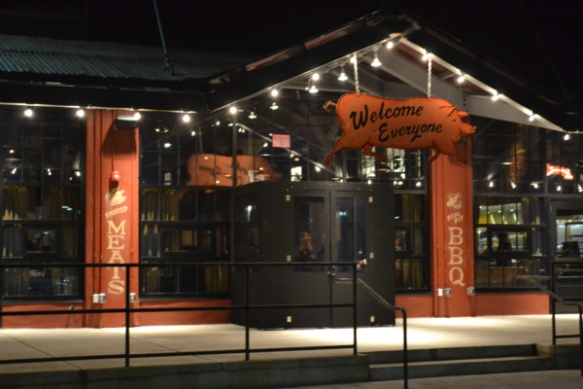 “Twas the night before Christmas, and…

Well it was the night before the official opening of Dinosaur BBQ in Stamford and I was fortunate to have my name included the list for this “Friends and Family” gathering. So with 200+ of my closest BBQ lovers, I wandered through the “stations” of beef, pork, ribs, and sides to see if the Q was as good as everyone was telling me. And with few exceptions, the food at Dinosaur BBQ was outstanding. And the items that did not hit a “10” I would chalk up to pre-opening execution. 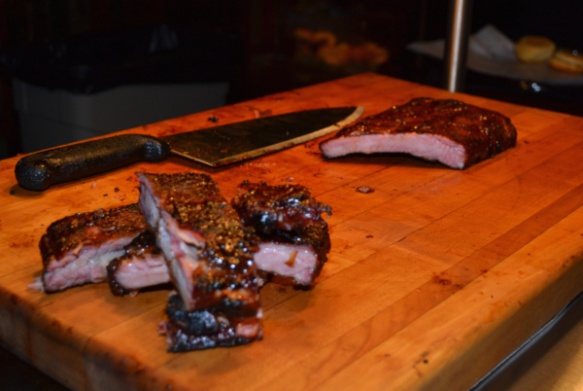 For a quick overview of the items that we sampled.

Wings – As I serpentined through the maze, a server brought a small plate of wings, well actually one wing, with two sauces, BBQ and Buffalo. The rub had a nice kick to it, and dipping in either sauce was equally delicious. I am not a huge Wing Man, but I would definitely order some for the table. Add me to the wing convert group. 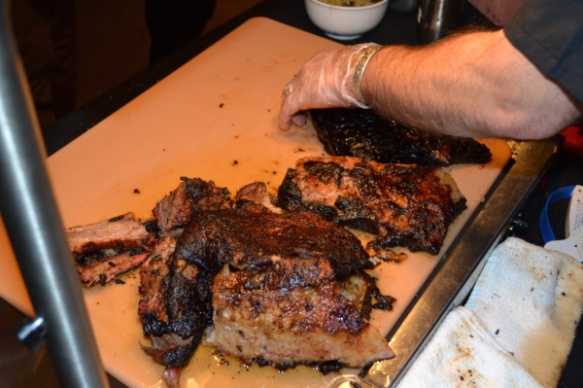 Brisket – Touchdown!! This won Best in Show for the night. The meat was perfectly smoked, and then they placed a few slices on a great roll. I added a touch of the spicy sauce on top to add to the already abundant flavors.

Pulled pork – The slab of pork sat on the steam-table as the crew removed the bark and then hand-pulled the meat. Then they formed a small mound, grabbed a bun and added a little sauce. Again the meat was perfectly smoked and was both succulent and delicious.

Ribs – Here is where the execution was not up to the standards of the other dishes. The slab the server cut my portion from had major problems. The bark was way too thick and the bones themselves were broken. It was next to impossible to eat, forget about picking up this portion. There was a nice dry rub and then a thin layer of sauce. The good news was the meat when you could get to it, was perfect. When I returned to snap the photos the other slabs looked perfect.

Macaroni salad with tuna – A cold version of the classic that brings back bad memories of growing up, But Dinosaur’s version was delicious; it had great flavor and offered a refreshing element to the spices that the meats carried.

Macaroni and cheese – This side was fantastic. It was creamy and full of flavor and to finish the portion they sprinkle a spicy and smoky dusting on top to increase the heat. The smooth and creamy cheese sauce and the spicy topping were delicious.

Fred Rice – OK I have to say, WHY? Why is a BBQ joint serving fried rice? But it was delicious, offered a totally different flavor profile than every other side and was full of flavor. Did it go with the BBQ, unfortunately I would not order this side on subsequent visits; it just was a confusing dish.

Cole Slaw – The cole slaw was very good, creamy and delicious and performed the task that cole slaw is supposed to perform with BBQ, add to but not distract from, the main course. The Dinaosaur BBQ did just that.

Corn bread – Like the cole slaw, not ups, no extras. It was right down the middle of I-95. It was a good was good, but not memorable

There was a ton of staff at the event, not sure how the servers will work out when there are tables and guests. They were all incredibly friendly, but will need additional training on the menu. With all of the beers offered they need to learn the basics and they could also use a little more training on the items that are offered. Darwin’s Theory will come into play and in a couple of weeks the staff should be fine.

Overall, I was very impressed with Dinosaur BBQ. It was not even officially open and it was already serving some of, if not the best, BBQ in the area. After years of Fairfield County being a BBQ Wasteland, we now have a bar that is high enough to be proud of.

Welcome to the neighborhood Dinosaur BBQ…I am glad you are here.