When restaurateur Colin Ambrose decided to follow his wife and three daughters and return to Fairfield County from the eastern end of Long Island, he brought a reputation for delivering creative farm to table cuisine. As the former owner/chef of Estia’s in Amagansett and the current owner of Estia’s Little Kitchen in Sag Harbor, Ambrose is celebrating his Darien homecoming by opening his latest restaurant, Estia’s American. After Ambrose settled on the location that formerly housed Ole Mole, he immediately set to create a rustic Americana décor that included American flags created from book spines, relaxing beach paintings and his personal collection of cookbooks and novels, including several by his uncle Stephen Ambrose. The restaurant will locally source many of the featured items capitalizing on the twenty years that Ambrose has worked in developing his unique cuisine. When I first met Ambrose, he was unloading a carload of local vegetables from a recent trip to Sag Harbor and the chalkboard on the rear wall mentions the local vendors and the farms, affectionately referred to as “Partners on the Plate” where many of the menu’s ingredients are produced.

Waechter, a graduate of the Art Institute of New York City’s culinary arts program. Chef Waechter’s resume includes many of the great New York restaurants and pastry shops including Mondrian Pastry, David Burke, Donatella and Beacon NYC, and she subsequently joined the pastry team at the Dinex Group under Chef Daniel Boulud. While operating the Amagansett Farmers Market she met Ambrose and their professional friendship started. Like Ambrose, she is a loyal follower of the farm to table movement as witnessed in her line of baked goods, Carissa’s Breads, which is produced with locally grown and harvested ingredients.

The food at Estia’s is characterized by unique combinations. During the initial six weeks, Ambrose concentrated on the breakfast and lunch menus with the traditional breakfast items available at both services. In mid-May, Estias expanded the hours to offer dinner.

guest’s preference sitting atop chorizo, potatoes, corn, peppers and onions. Since I am a big fan of oozing yolks I ordered two soft poached eggs. The chorizo was bold in flavor, had a nice medium spice and the vegetables maintained their crunchiness. The corn brought sweetness to the dish and the choice of sweet potatoes versus traditional white potatoes perfectly balanced the flavors of the other vegetables. Overall I liked the bold and sweet flavors of this dish and next time I would order the eggs sunny side up to increase the yolky goodness.

The table shared an order of the Turtle Rolls as a pre-appetizer sampling. This all-vegetarian dish included avocados, onions, black bean puree and Napa cabbage encased in a flour tortilla wrap. The combination had a good variety of flavors with just a little spice and a touch cilantro. I thought this was a good introduction to Estia’s flavors and I recommend this dish to start the meal.

I have been searching for a good Cubano sandwich in Fairfield County and the Pablos Cubano prepared at Estia’s was a step in the right direction. Chef Waechter’s house-made bread was delicious and I enjoyed the Reynold’s Family Farm pulled pork and the perfectly melted cheese, plus the pickle added the correct level of acidity; although the sliced ham could have been more flavorful to match the other ingredients. Overall Estia’s Pablos Cubano was very good and I now need to search for other good Fairfield County Cubano sandwiches.

The Silvera’s Salmon Wrap included grilled salmon, arugula, salsa, mojo, bean puree, plus tomatoes all wrapped in a flour tortilla. For those who would like a less spicy entree for lunch, this is a good choice. The mild salmon was moist and flavorful and I enjoyed the addition of the arugula, which added a peppery flavor component and complemented the black beans and tomatoes. 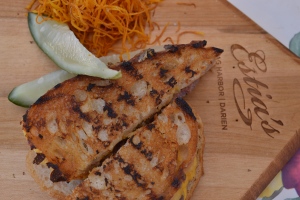 There were two sauces that require a special shout-out and each added delicious flavors to the dishes. The red sauce is comprised of guajillo chili, onion, garlic and tomatoes, while the green sauce includes mint, parsley, garlic, jalapeño peppers and lime. Both were delicious and added a decent level of heat and flavor to the dishes.

After two months, Estia’s has refined the offerings I look forward to returning and enjoying many more.

Originally reviewed by Jeff “jfood” Schlesinger on www.ctbites.com on May 20, 2012