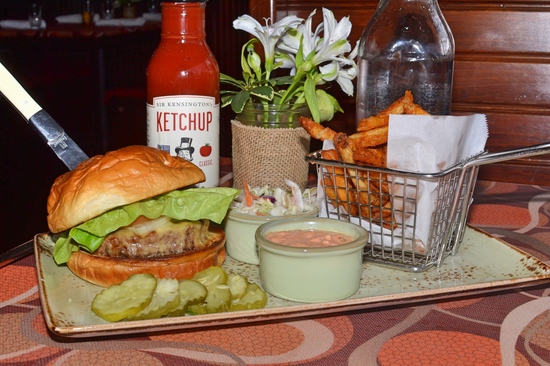 Old Greenwich Social Club opened last November, replacing an area icon, Mackenzie’s Bar and Grill, on Sound Beach Avenue overlooking the Old Greenwich train station. The location is convenient for a drink with colleagues at the end of the commute, a relaxing meal with the family, dinner with friends or just relaxing at the bar. 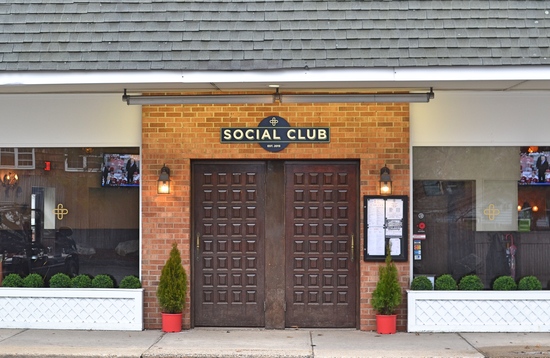 The brainchild of local Jed Simon, this newly reopened watering hole presents an atmosphere reminiscent of “Cheers.” The wooden double-door entrance leads directly into the large bar area dominated by a U-Shaped bar. On one side, numerous taps offer a wide selection of beers including Bronx “Uptown Rye,” Jack’s Abby Express, Alagash “White,” Thirsty Dog, Omnipollo “Shilkmake” and Two Roads “Session IPA.” To the right of the bar is the main dining area with booths, a long wood-topped table plus others covered with retro-vinyl. Adorning the walls are photos from years past and sports memorabilia. During the summer months, guests can enjoy their meals on the patio to the left of the bar. This is definitely a local-oriented restaurant. On the afternoon I visited, Simon was hosting a happy hour for local teachers who missed St. Patrick’s Day and hired a trio to perform.

In January Chopped champion and celebrity Chef Alex Garcia joined OGSC. Chef Garcia was born in Cuba and has been at the forefront of the popularization of Cuban food with his association with numerous New York restaurants including Patria, Erizo Latino, Calle Ocho, the Copacabana Supper Club, Babalu Restaurant and Lounge, and A.G. Kitchens. Chef Garcia is slowly adding his nuances to a predominantly classic American-based menu, with a smattering of international dishes. In designing the menu, Simon was sensitive in maintaining several of the favorites from Mackenzie’s.

I was invited to sample several dishes as well as Chef Garcia’s additions. 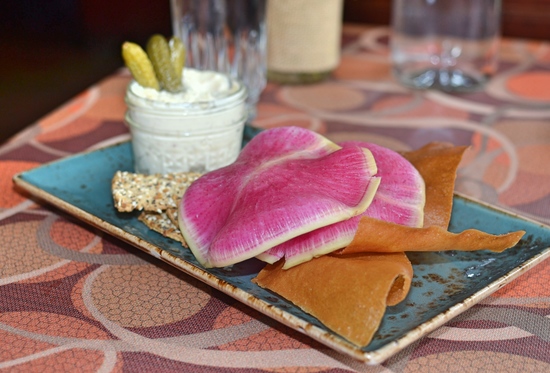 From the “For The Table” section the chef prepared the “Smoked Trout Dip” and the “Bacon Wrapped Dates.” The trout was an individual glass jar was filled with the fish paté, served with large, thin slices of watermelon radish, flatbread crackers, fried tortillas, with three gherkins protruded from the top of the jar. The dip was creamy, with a mild smokiness, and when combined with the gherkin or the radish atop one of the crackers, created a delicious balance. This is more a single serving than a table share. 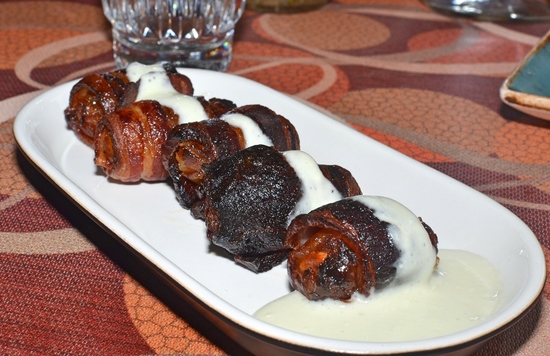 The dates included six almond stuffed dates were wrapped in bacon and served with a swath of Blue cheese sauce. The combination of the ingredients was delightful with a wonderful sweetness from the dates and the creamy cheese sauce. The thick slices of bacon were less salty than expected and the almond offered good textural contrast. While some of the wrapped dates were well prepared, the bacon on others was burnt.

The next dish was a sampler of three separate offerings from the “Small Plates” and “Between Bread” sections. 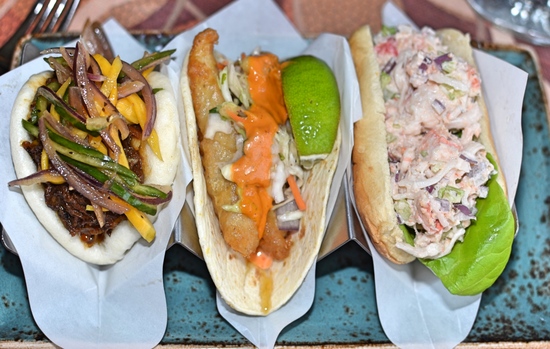 My favorite of the three was the “Lobster and Crab Roll (right).” The filling was excellent. It delivered bright, crisp flavors, emphasizing the sweet lobster and crab meats with just a hint of pungency from the onion. The filling was held together with the slightest amount of Old Bay infused mayonnaise, nestled in a leaf of lettuce, all in a soft, buttery bun. The “Fish Taco” (center) was served on a single tortilla, topped with cabbage slaw and finished with a layer of Cascabel salsa. The lightly coated fish was perfectly fried. It would have benefitted from a touch of seasoning; it was a little bland. The slaw was delicious with the addition of julienned mango, which added a delightful sweetness. The “Korean Style Braised Short Rib” (left) included slowly braised short rib, that was shredded, slathered in an Asian BBQ sauce and finished with cucumber slaw. The meat was one of the best I have tasted, rich in flavor and incredibly tender, and the vegetables added a good level of spiciness. Unfortunately, the BBQ sauce overwhelmed the other ingredients.

The “Pat La Freida Burger” (at the top of the article) was served with a scant amount of melted cheese, a thin slice of raw onion, lettuce, and tomato on a soft potato bun. Accompanying the burger were seasoned fries, pickle slices and OG Sauce, and branded into the top of the bun were the OG initials. Prior to cooking the patty was seasoned with a variety of spices including salt, pepper, onion and garlic powder and then splashed with Worcestershire sauce. It was grilled to medium-well (that is overcooked for me), the grind of the meat was highly compressed (I prefer a loose grind) and the seasoning overwhelmed the meat. The OG sauce was a good addition to balance the bold seasonings and created a better combination. The seasoned fries were well prepared, although added even more bold flavors.

The other entree was the “Glazed Salmon,” served over braised leeks and lobster mashed potatoes and presented within a vertical shredded potato ring. The salmon was finished with a glaze of Whisky-maple sauce and black pepper. The kitchen prepared the salmon to medium-well, was a little dry and benefitted from the sweet contrast of the maple-honey glaze. The leeks were delicious and worked well with the salmon but the lobster mashed potatoes were a bit bland.

Save room for dessert, especially the Caramel Crème Brulée. The OGSC version was excellent, with an extremely luscious Crème topped with a perfectly melted sugar topping. This was one of the best crème brulées I have eaten in quite some time.

Overall, I really liked the menu that the Old Greenwich Social Club has created. It offers a diverse selection for moms, dads, kids and adults in an environment for locals to bring family, friends and colleagues for a relaxed time. There were several misses by the kitchen on my visit with seasoning and temperatures, but the bones are in place for Old Greenwich residents to enjoy a good time in a familiar watering hole with drinks and food.