Thrillist recently announced its Best Burgers in America, and Parlour, the pubby sibling to Borough restaurant, was the sole winner from Minneapolis. Those are strong words given some of the great burgers in the Twin Ciries, and being a burger devotee I was incredibly excited that I would enjoy another great Twin Cities’ burger. I am also a fan of Borough and if the kitchen could channel the talent of my previous visit into its burger, I was all-in. 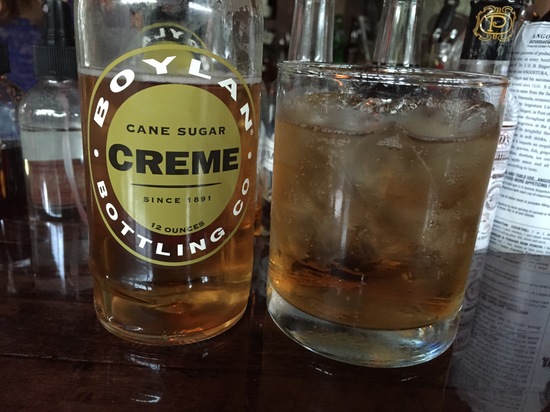 Parlour is located below Borough on Washington. The space has an urban vibe, with eclectic seating that includes high back semi-wingback chairs, a few banquettes and a fabric-covered wall in the rear with more funky tables and chairs. There is also a long wood topped bar that seats twelve. At 6PM on a Tuesday evening, all the tables were occupied and there were only three vacant seats at the bar.

The menu is somewhat limited with several small plates and a fair number of desserts. The menu description of the burger was “ground sirloin, ribeye, brisket, American cheese” served with a few slices of pickles, fries are a separate order.  I asked for my burger medium-rare and an order of fries. As I waited I watched as burger after burger were delivered to over 75% of the waiting guests, this was a very good sign.

The burger and fries arrived quickly, the burger on a single salad plate and the large mound of fries on an oblong dinner plate. I first tasted a few fries and the level of salt made my head snap back, it was absolutely overwhelming. This was not a good start. I hoped the burger was better. I pulled a little piece of meat that was dangling over the bun and tasted. Like the fries the kitchen overwhelmed the meat with salt, I was hoping this was isolated to that little piece. I cut the burger in half and it was prepared well-done, not to my requested medium-rare. I asked the bartender and she said she input “medium-rare” and would I like a new burger. I agreed and the first burger and fries were removed from the table. A couple of minutes passed and a manager approached and asked about the burger. I told her it was delivered well-done and she explained all of them are because “of the amount of butter” in the patty. No worries, now that I know to expect it well-done. I asked if she could tell the kitchen to take it easy on the salt.

Burger #2 arrived and the mound of fries #2 were smaller and also served on a smaller plate, but still a good sized portion. I cut the burger in half and it was well-done, but glistened with juices. I pulled a little piece of the meat to taste and it had good flavor and the kitchen was more prudent with the salt. There were two patties, each topped with melted cheese. In total, I would estimate over a half pound of meat, it was a substantial burger. The cheese was perfectly melted and the bun was buttered and griddled, both on the interior and exterior. The grind was medium and there was good sear on the exterior. This had the makings of a great burger, just meat, cheese on a buttered and grilled bun. I took my first bite…

And then a few more bites before I decided I knew that I was in the minority. I thought it was a very good burger but not to the level as some of the great grass-fed meats in other places in Minneapolis. It was very juicy but was this from the meat or the addition of the butter, I do not know. I thought the cheese and the bun were outstanding, two of the best I have ever tasted. The cheese was rich, creamy, with great flavor. The bun was fantastic and even better with the additional buttery goodness and mild crunch from the grilling. I tasted a few of the fries and the kitchen was less aggressive on the salt, thankfully, but they were very substandard. They lacked the textural contrast of a crispy exterior paired with the soft interior, a one dimensional product.

As much as I entered Parlour with high expectations, the burger was very disappointing and the fries were very mediocre. Given the recent inclusion in Thrillist, the number of orders leaving the kitchen and the other meal I previously ate upstairs at Borough, I was expecting better.