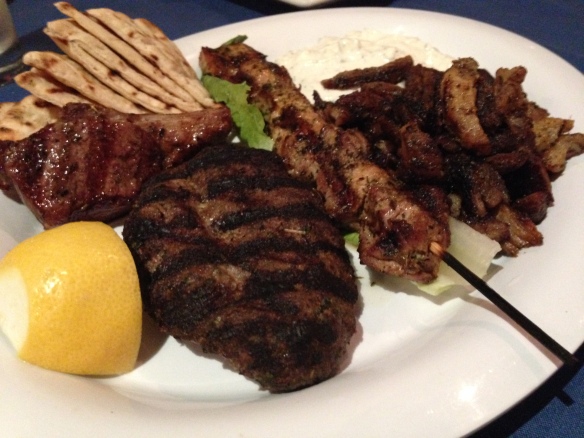 With all the positive reviews and posts about Pontos Taverna we decided to have dinner after a movie at the Garden Cinema. Our impression was quite different from all the positive accolades.

After a movie expect to wait for a table but ours was well within the 20 minute estimate the young lady mentioned when we left our name with her. Both she and all of the staff were incredibly pleasant throughout the evening, many restaurant should send secret shoppers to Pontos to learn from them. The interior is a cross between a cafeteria and a beer hall. No ambience whatsoever, no music at all, just the loud din of other guests…the ambient noise is deafening.

We decided to order a couple of appetizers while we looked through the menu. As I looked for an entrée I saw several marked “MP”…I would like to know the prices, but they were all reasonable when asked.

The Tzatziki was very good and offered a bright refreshing start to the meal. The Melitzanosalata included too much garlic, which overpowered the eggplant. I liked the Dolmades, which were mild and not overwhelmed by lemon.

I asked our server what she would recommend and with her reply “everything” I ordered the sampler plate, which included a lamb chop, a Beeftkia beef patty, a chicken Souvlaki skewer and gyro meat, served with Tzatziki. My wife ordered one of the specials of the evening, the sautéed Bronzini. The server forewarned us that the fish was served with no sides, but we still had appetizers on the table so it was fine.

The sampler was a hefty dish. The basic comment is that everything on this dish was overcooked. The miniature lamb chop was served well done. My two bites indicated that it was perfectly seasoned, but lost all its juiciness from the preparation. The beef patty was crispy on the exterior and firm on the interior. The pillowy interior I was looking for was not present. The chicken was the best of the dish, it still maintained a modicum of juiciness but was more dried out than juicy. The gyro meat was inedible, incinerated and no amount of Tzatziki could bring it to back to life. My wife’s fish was very tasty and cooked to the correct doneness but was smothered in oil, eating both filets was not possible.

It was obviously a different experience for us than many others. The front of the house was excellent but the kitchen was not up to the hype that others have mentioned.