I heard a lot about Lago Tacos and decided to give the new Lyndale location a try. Located on Lyndale South the restaurant has plenty of seating surrounding two large bars plus tables surrounding the bars as well as the back room.

The menu is divided into several sections.

I ordered the “Sweet Corn Cakes with Grilled Shrimp” to eat while I looked through the entrées.

This was one of the best dishes I have eaten in a long time. Three perfectly fried corn cakes, each topped with diced sweet tomatoes and red onion, a swath of crema, a thin slice of avocado and a grilled shrimp, all sitting in a pool of salsa verde. The corn cake was sweet with a slight crunch. The shrimp were dusted with pepper and then perfectly cooked, the diced tomato was sweet while the crema and avocado delivered a smoothing aspect. The latter was required since the salsa verde delivered a good level of spiciness. Together this was outstanding.

I asked the bartender if could order a combination platter of tacos and he said I could but it was a little more expensive. I ordered a Walleye, a steak ad a chicken tiki with a side of black beans.

My expectations were high given the appetizer. Unfortunately the tacos were not in the same league as the corn cakes. My basic criticism was the tortillas. I found their taste was bitter and fought with the fillings. Likewise I found the filling delivered differing textures, but the flavors were lacking.

The Walleye was the best of the three. What made this taco better than the other two was the fish. It was lightly crusted and fried. It was topped with a little spicy sauce, red onion, lettuce, tomato. The twin tortillas were filled to the brim. Nothing in the toppings was memorable. 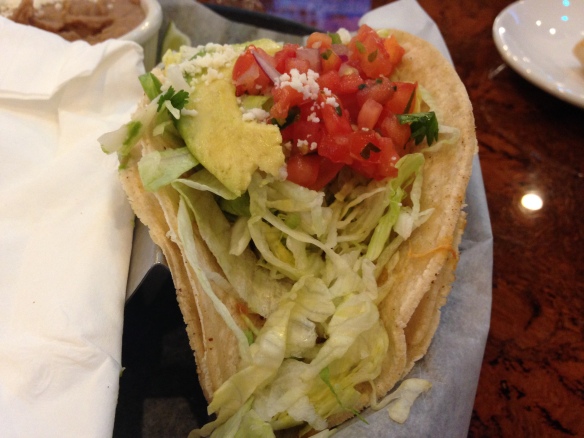 The Chicken Tiki included the same toppings as the Walleye minus the spicy sauce. In addition to the lack of flavor in the toppings, the texture of the chicken was between shredded and mashed, very weird and unpleasant texture. Likewise it was dry. If not for the added sauce this might have been inedibly dry. It again was filled to the top of the tortillas.

My least favorite was the steak taco. It was barely half filled and was served with raw onion, cilantro, a slice of avocado and a little Queso cheese. The steak contained just a hint of spice and was served well-done. With only half the tortilla filled the overwhelming flavor, unfortunately was the ill-flavored tortillas.

I went to Lago Tacos expecting a wonderful Mexican experience. The corn cakes with shrimp met that expectation, but the tacos fell significantly short of delicious.