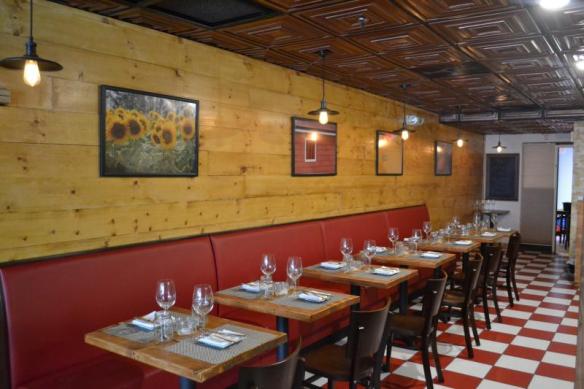 Slightly more than a year ago, restaurant Bar Sugo opened on Wall Street in Norwalk featuring a variety of owner/Chef Pat Pascarella’s fantastic pizzas, meatballs and delectable pastas. Pascarella recently handed the reins of the day-to-day culinary oversight to Chef Paul Failla, and CTbites re-visited to taste Chef Paul’s cuisine and his creative spin to the menu.

Chef Faillia attended the Culinary Institute of America in Hyde Park before accepting a position at Burger Bar in South Norwalk. His culinary training continued at Dolce in Norwalk, The Atlantic Grill in Manhattan and The Saltwater Grille in Stamford, where he met Pascarella. He subsequently worked with Chef Dan Kardos at The Whelk and was one of the opening chefs with Chef Kardos at NOLA Oyster Bar.

When Pascarella first approached Failla about joining Bar Sugo, he was looking for a successor to continue his vision of “food that Italians eat every day” while allowing the new chef to add his individual flair to the dishes. Chef Paul accepted the challenge and he is already placing his mark on the menu, focusing on Italian small plates. Guests create their meal from a selection of cheeses with house-cured meats, Bar Sugo’s meatballs (a few modifications are already appearing), up to twenty Cichettis (small plates), six pastas, or one of six brick oven pizzas. He told CTbites, “We will change several items on the menu on a weekly basis.” After an initial visit Chef Paul is succeeding in presenting delicious and full flavored selections.

The “Burrata Bruschetta” was served atop stewed garbanzo beans, arugula pesto and topped with toast points. The Burrata was ultra-creamy and mild in flavor and the Garbanzo beans added a touch of earthiness and a bit of a bite in texture. The highlight was the arugula pesto that added a little saltiness and nuttiness from the Parmesan cheese. 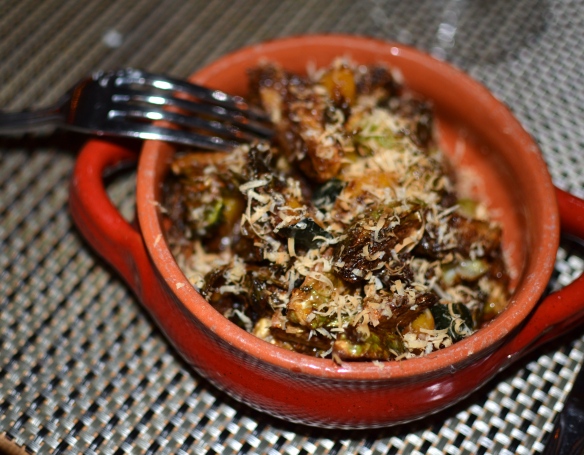 Bar Sugo’s “Brussel Sprouts” was paired with chunks of squash and sautéed with sherry and truffle honey, which created and crispy caramelized exterior. The Brussels sprouts were “like candy,” sweet, crispy and incredibly delicious. This is a great choice to share amongst your group. 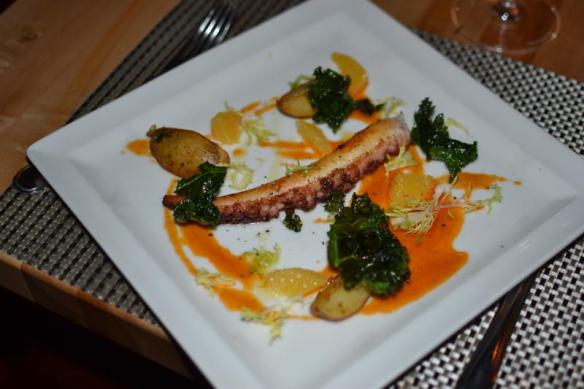 The “Octopus” was presented with orange segments, potato wedges, and kale chips, all coated with a harissa infused sauce. The octopus was soft on the interior with just a slight crispiness from the kitchen finishing the presentation on the grill. The octopus was flavorful and the orange segments added a little sweetness and offset the spiciness of the harissa. The kale chips added a little textural contrast but the seasoning was slightly uneven with one receiving all of the salt while the others were missing any hint.

I enjoyed two of the meat options. The “Short Rib” was served atop celery root puree, plus a few fried oysters (not normally included but some local oysters arrived from Norm Bloom earlier in the day). Unlike many other wine-braised short rib preparations, Chef Paul veered slightly from the norm and developed an interpretation of a traditional English combination. The celery root was accented with a horseradish crème fraiche that was a tangy and enjoyable balance to the richness of the beef, creating a modified English Beef with horseradish sauce. The addition of the fried oysters was strange and was more confusing than complementary.

The “Millstone Lamb” was served over a puree of smoked sunchokes, bacon olives and crispy faro. The meat was exceptionally tender and flavorful and the puree added a mild earthiness to the dish. The crispy faro added a surprisingly delightful crunch. This combination was fantastic.

Chef Paul saved the best for last and a special call-out is required for his “Spaghetti Neri,” one of the best pasta preparations I have tasted. The squid ink pasta was served in a smoked tomato sauce with shrimp, and topped with bread crumbs and Bottarga. The pasta was perfectly prepared to al dente and the mild smokiness and spiciness of the tomato sauce was delicious. The entire presentation was elevated with the addition of the Bottarga, salt-cured fish roe that added a brininess to the dish that was fantastic. The shrimp were cooked perfectly with a slight crispiness to the exterior and a soft interior.

Chef Paul prepared an “Apple Panna Cotta” for dessert, topped with an oatmeal streusel and finished with a drizzle of sweet caramel sauce. The apples were first steeped with cinnamon, which created a very mild apple flavor, I would have preferred more from the apple. The streusel added a great crunchiness to the dessert and the caramel sauce was delightful. This was a great way to end the meal.

Moving into the second year of business, Chef Paul Failla is elevating the culinary scene to an otherwise challenging location nestled between stores with similar signage. Once inside, the vibe is alive. The food is exciting and the prices allow for a reasonably priced dinner for a couple or shared plates for a family that will not break the bank while enjoying great company.

This review was originally posted on http://www.CTbites.com at: