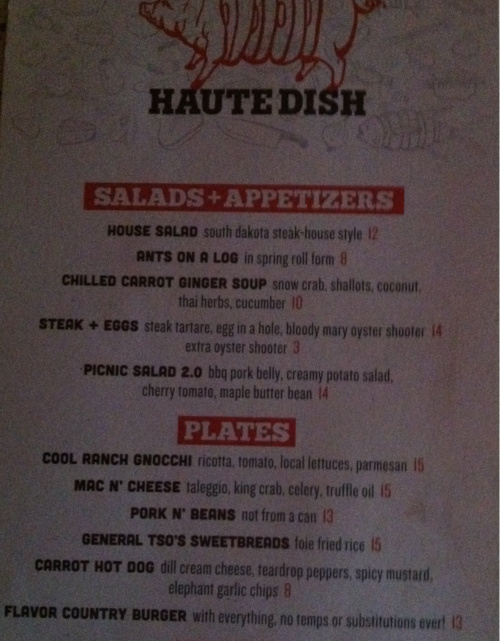 Almost three years ago I visited and wrote that Haute Dish showed good potential; so it was time to return. Again, after my recent meal where I thought one dish was fantastic and the other was an over-thought disappointment, I believe the “good potential” opinion still stands. 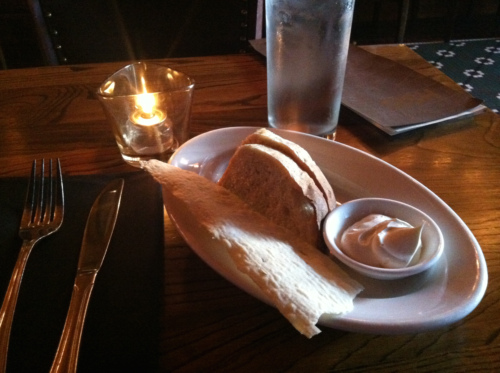 The interior is speakeasy modern with a large portrait at the entrance welcoming the guests. The long bar extends along the right wall and a long row of banquettes along the left with a separate dining area in the rear. Service was excellent. My server was both knowledgeable and opinionated. As much as I wanted to order the General Tso’s Sweetbreads (as it turns out I ordered the sweetbreads at the previous visit), he kept nudging me to the Mac n’ Cheese, which was a great recommendation. I wish he would have steered me away from the burger, but I was pretty determined to give this burger a try.

The “MAC N’ CHEESE” was not your mom’s green box or Velveeta variety. I cannot remember the last time I ordered this comfort food in a restaurant, but I assumed a  plated bowl with a heaping mound of steaming pasta, engulfed in sauce and topped with some sprinkled breadcrumbs. What arrived was a nicely plated horizontal interpretation of this classic dish. The jumbo rigatoni shaped pasta was perfectly prepared to al dente and topped with King Crab, celery and truffle oil. The incredibly smooth cheese sauce was primarily Taleggio cheese and it was delightful. There were several chunks of sweet crab that were perfectly prepared. The kitchen then added a little unmentioned ingredient, roe. Each time one burst in my mouth it added a great textural sensation. The celery, scallions and bread crumbs added a little zip and crunch. This rendition of MAC N’ CHEESE was delicious…I may need to begin a search for other great offerings. 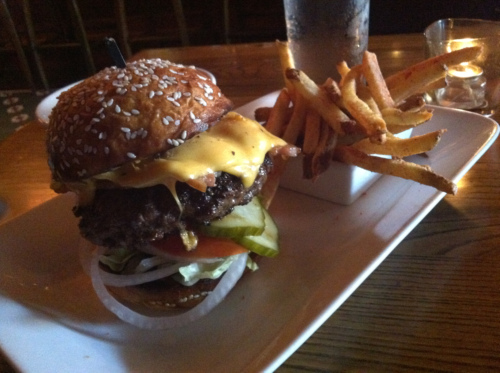 When the “FLAVOR COUNTRY BURGER” arrived all I could do was stare. It looked like a culinary totem pole. Granted the menu states “with everything, no temps or substitutions ever!” but this was layer upon layer of toppings. Included in the tiers were pickles, tomato, cheese, mushrooms, onions, bacon with mayo-horseradish…all served on a buttery brioche bun. Accompanying the burger was a small portion of fries. The meat was delicious (although a little over-salted), the kitchen hand formed the meat to retain the looseness of the grind and the flavor was reminiscent of excellent grass fed meat. Unfortunately the toppings were just too many; they overwhelmed the great meat flavor. Each was delicious in its own right (I especially liked the spicy pickles) but there are times when too much is too much and this was one of those occasions. The brioche bun was one of the best I have ever tasted and was a perfect choice for the meat. The fries were horrible. They were dense, almost hard in texture, not from being over- or undercooked, and the kitchen topped the fries with either a paprika or a different red pepper spice, which I did not like at all.

Overall I still believe that Haute Dish has potential but they need to know when to stop. The Mac & Cheese was a beautiful combination of textures and flavors and a brilliant interpretation while the burger was just too much and did not work at all. The fries?…all but a couple went back to the kitchen.