Located on the north side of West 26th Street just west of Nicollet Avenue South, Eat Street Social is a very cool and hip restaurant with a good deal of potential. There is limited parking behind the restaurant and if you cannot find a spot in their lot, the parking is difficult. Once inside you are met by an eclectic staff who were extremely friendly and freely offered opinions on their favorite items. Most importantly they did not try to steer you to the most expensive items on the menu. 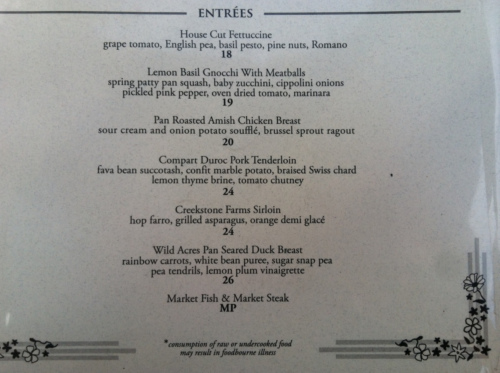 The interior is very well done with a small dining area in the back right quarter with a small bar, and a large u-shaped bar and dining room with small stage to the left. Through the latter is a patio that contains both a lattice-covered pergola plus additional tables with umbrellas. The chairs are comfortable plastic strapped wrap-around and seat approximately 50 guests. 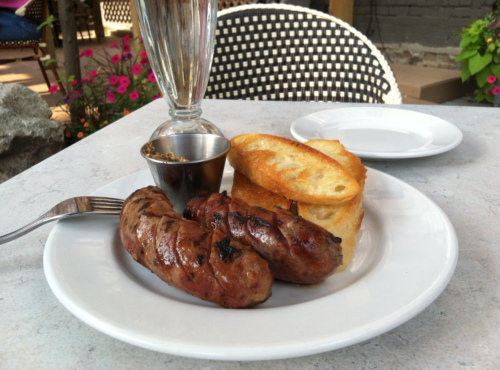 The server informed me that the night’s Grilled House-Made Sausage was pork, potato and rosemary. The dish was served with whole grain mustard and buttered and grilled slices of baguette. I ordered this for my appetizer plus the Wild Acres Pan Seared Duck Breast with rainbow carrots, white bean puree, sugar snap peas, pea tendrils and topped with lemon plum vinaigrette for my entree.

When the two sausages arrived they looked different from each other. I sliced one (it was the potato version described) and it was delicious with a good spice level and a moderately dense texture. Unfortunately both the potato and the rosemary were overwhelmed by the other bold flavors. From a textural point of view the small dices of potato softened the texture of the sausage. When I sliced into the second link, it contained an abundance of diced tomatoes and no potatoes. The flavor and texture were also very different; a milder rendition from the potato version with a slightly denser texture, not benefiting from the diced potato. I asked both the server and the MOD what type the second was and the former was surprised that there were two varieties and the MOD told me there was only one type of sausage that evening. Sorry but there were two variety. Nonetheless I enjoyed both varieties, especially with a little dab of the whole grain mustard. 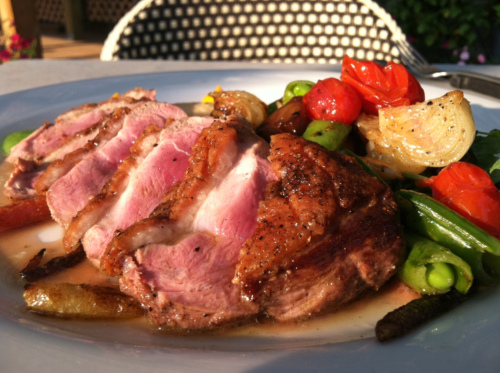 The Pan Seared Duck was an interesting dish. It was as if two different dishes were randomly combined. Was this a salad with the duck as the accompaniment or vice versa? The salad was composed of grape tomatoes, sugar peas, roasted garlic, several varieties of baby carrots, onions and chestnuts. The flavors and textures were outstanding, and the addition of the chestnuts was brilliant. The inclusion of the white bean puree was also a great idea; it added an earthy and creamy element. Unfortunately it was over-dressed, which detracted from the enjoyment. This salad, by itself would make for a great vegetarian entrée. The duck was nicely seared, finished to a medium rare and then topped with the lemon plum vinaigrette, which was more lemon than plum. The dressing brought citrusy back-notes to and complemented the richness of the duck meat. Unfortunately my duck breast was tough and the white tendon was still present throughout the breast, creating a difficult cutting and chewing experience. It is rare that I enjoy the salad much more than the protein, and this was one of those times.

Service was delightful. My server was spot on, water glass was constantly topped off and she checked in after the appropriate time. My only comment would be that neither the server nor the MOD knew that there were two different sausages on my plate and neither offered to check with the kitchen. When I discussed my thoughts on the duck with the manager he was extremely pleasant and we had a pleasant conversation about the dish.

Overall this was a very good restaurant with great potential. I would definitely return to try other dishes.