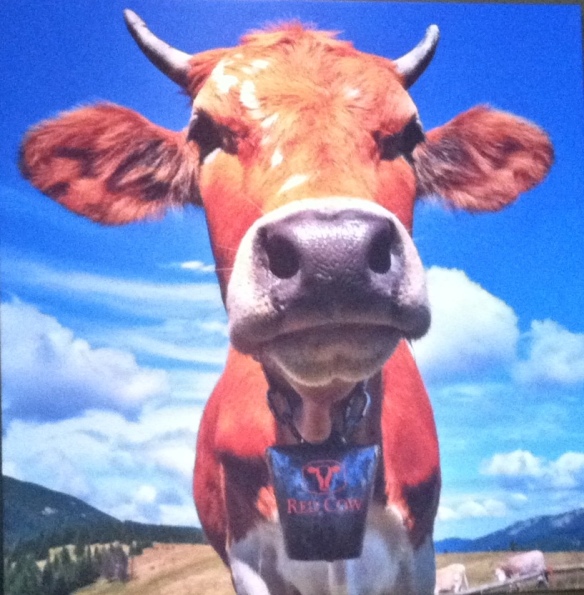 Eater.com posted the “10 New Twin City Burgers to Eat Right Now” in April and Red Cow was on their list, was convenient and fit nicely into my schedule. When I arrived a little before 6PM on a Wednesday night, the place was 80% filled with families, young couples, and several tables of retirees, a very eclectic group…all looking for the high-end diner experience. I was quickly seated (would not have been the case when I left an hour later when the waiting area was jammed). The walls were adorned with large paintings (Ms. Red Cow herself watch my every move) and the feel of the space was very family oriented and relaxing. The staff darted around the restaurant to serve customers. The relaxed atmosphere of the décor was definitely offset by the rushing servers. Since I was there for the burger, the first order of business was to choose one from the many choices available. Red Cow does a great job in offering a variety of meat and non-meat options. I chose the Manhattan, which included an 8-oz patty from NY butcher Pat LaFrieda plus Cotsworth cheese and bacon, and I added caramelized onions. To start, I ordered  the Pork Belly Sliders (offered at a discount prior to 6PM) to start. 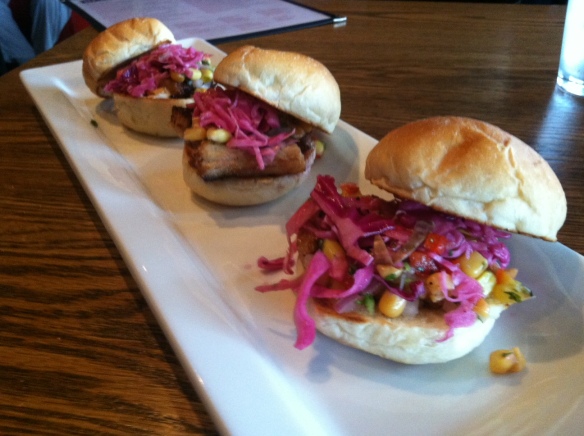 The pork belly appetizer consisted of three sliders, a slice of pork belly topped with a slaw of red cabbage, corn, red pepper, onion and cilantro, encased in a mini bun. The buns were, as others have described, soft and delicious. The pork belly carried great flavor and the slaw added a slightly spicy element to the sliders. Overall this appetizer was a great choice and the highlight of the visit. 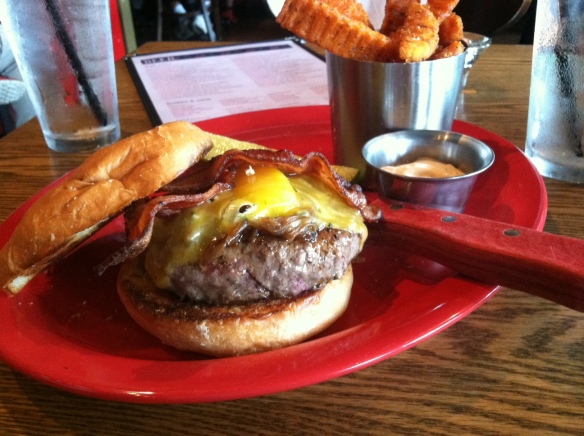 The burger was good, but not great. On a positive note the kitchen cooked it perfectly to my requested medium-rare, the patty released a little juice, but it was extremely compressed, losing all the great qualities of a loose grind. I always question the use of LaFrieda meat as it just does not have the great flavor I look for in a burger and this was again the case, but at Red Cow there was also a subtle bitterness to the meat. I cannot give high marks to either the texture or the taste. The cheese was my favorite part of the burger, great flavor and perfectly melted. There were two strips of bacon that delivered a little flavor but I would have preferred additional saltiness and smokiness. The caramelized onions were soft but the flavor was a little acrid, the sugars were not fully released. The sweet potato fries (the limited amount they included with the burger) were very dense and did not have the soft interior texture to complement the crispy exterior. Likewise the flavor was not as sweet as many other sweet potato fries. I would guess they were frozen and merely fried on site. Overall these were not to my liking. The burger and fries were served with an aioli, no ketchup. If requested there are two choices of ketchup, prepackaged bottled and a house made. The latter was outstanding with the addition of a small amount of balsamic vinegar, which really added great flavor. In addition to the pork belly sliders, the house-made ketchup is highly recommended.

Service was actually fun to watch. The servers were young, as in high school. They were incredibly friendly and ran around the restaurant with passion. Everything I ordered was “a great choice.” There were two managers who wandered to tables to check-in so there was some supervision, but this is a hamburger joint and is staffed as such, which is a good thing. Unfortunately in my case I sat for ten minutes before anyone approached the table, so patience is a virtue. The worst aspect was after one bite of my appetizer, no exaggeration, one bite, my burger arrived. “I’m really sorry, but the hamburger came out really quickly.” The server thought that was acceptable and tried to place on the table. I just told him I was not even close to ready for the burger. He seemed befuddled but eventually understood and removed the burger. A little more training and staffing is something the owners should consider.

Overall I thought the place was a fun atmosphere to take the family for a burger. I would recommend avoiding the surcharge for the “Manhattan” with the LaFrieda meat and look into the regular versus the sweet potato fries. But be advised that a family of four could easily spend $100 for a burger dinner.