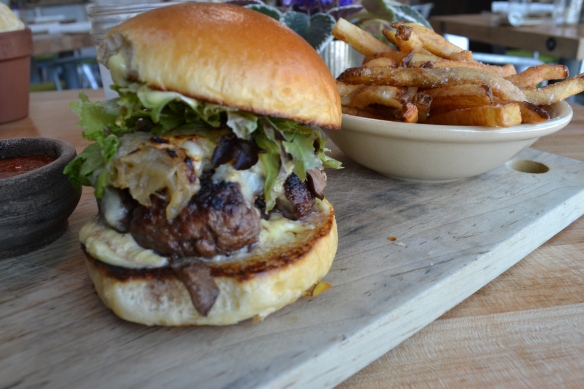 We arrived and were impressed with the interior space. Unfortunately it overlooks the yard and the garbage outside the windows was a bit distracting and should be addressed.

A warm bread loaf in a pot was brought. The bread was very good and still warm.

I ordered the Café Burger described as Painted Hills Beef, caramelized onion, mushrooms, Cheddar cheese, and horseradish aioli, served on a brioche roll. This is an enormous and vertically demanding burger. The meat is ground on premises and had an interesting texture, more pieces than ground beef. Some, including me, may not like the texture, it was almost a gelatinous feeling. The caramelized onions were perfect…they were soft, sweet and delicious. The cheddar was a good addition and complemented the rich flavors of the beef but the mushrooms were lost in the other flavors, they were not needed. The enormous swath of aioli was a great addition and the Brioche from Balthazar in NYC, was first grilled and it added a nice, sweet flavor to offset the bold flavors of the other ingredients. The skin-on French fries were very good, nicely seasoned, crispy on the exterior and soft on the interior.

Overall it was a very good burger, but could use a little adjustment of the textures and the ingredients to improve.

My wife ordered the lobster roll. The lobster was mushy and did not taste right. She experienced some post lunch issues and I contacted the restaurant. The manager scolded me, told me that she and others ate the lobster that day, but said she would look into and call back. I never heard back from her. I was very disappointed in her lack of caring, and no follow up is unacceptable.

It might be understandable if the kitchen has a bad day, but more often than not, the reason for non-returns and “doesn’t like” relates to the management. At Terrain the burger was pretty good, the lobster roll was bad and management was unresponsive.