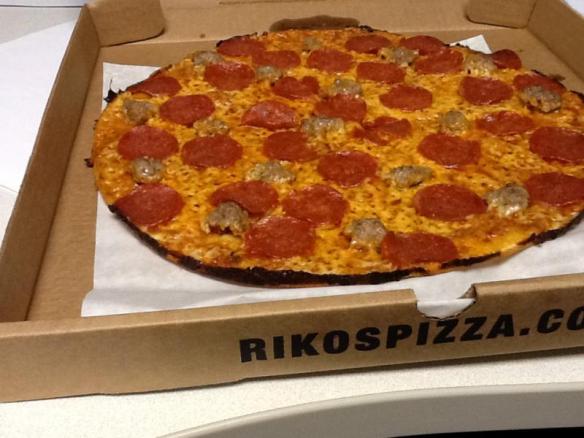 I consider myself very fortunate in my historical relationship with pizza. Born and raised in NJ where the local pizzeria created $1.60 pies (yes that is under two-dollars for the entire pie, not a slice), I graduated  to the “Bar Pie” at Star Tavern and Pizzeria in East Orange, before leaving the Garden State in my late teens. While in College in D.C. I found Greek-style pizza and then graduate school in Chicago introduced me to two eye-opening events…the Giordano’s Stuffed Deep Dish pie and the Midwest propensity to cut their pies into little squares.

I hit the jackpot on my move back east with my marriage to a women from the New Haven suburbs and her presenting my all-time, favorite, best pizza…Sally’s in New Haven. Never did I appreciate the classical flavors and textures until then. I was fortunate to share a table with Flo shortly before her death and enjoyed both her pizza and her stories. One of my first assignments for www.ctbites.com four years ago was to give my opinions of the iconic Colony Pizza in Stamford. It was a classic full pan pizza with a thin crispy crust, basic toppings and their secret ingredient, hot oil. One bite and I understood the beauty of this creation. Take a little bit of this theory, add a little bit of that theory…delicious.

When I heard that a new kid in town was “duplicating” the Colony-experience I needed to test this theory. Riko’s Pizza originally opened in the same neighborhood as Colony and many claimed “foul.” But for me, it was less about the ownership of “The Recipe” and more about the product. Others agree, since Riko’s has expanded to a second location on Newfield and a third location on Main Street in Norwalk.

After a couple of Riko’s pies I am glad they have a location near my office as well as nearer the house. Both offer the same quality pizza…delicious. Those from the Norwalk and the Newfield locations are twin sons of different ovens. The pies are baked in high rimmed pans, reminiscent of the Chicago deep dish pan. The dough is stretched to the circumference and then topped a little sauce, and then you design the rest from almost 30 different toppings (Colony has twelve to choose from). I consistently stay basic with pepperoni, sausage and hot oil, hey if it ain’t broke don’t fix it.

The thin crust was nicely crisped, not cracker and stilled maintained a degree of pliability. The sauce and cheese were delicious and the pepperoni and sausage were both excellent. Then the hot oil kicked in and this was an overall fantastic pie. Just make sure you have a ton of napkins since the pie is oily by itself and then adding the hot oil raises it to another level.

If you do not want to make the trip Colony, you will be just as happy with the pies at Rikos, just remember there is no seating so all of these pies are take-aways.