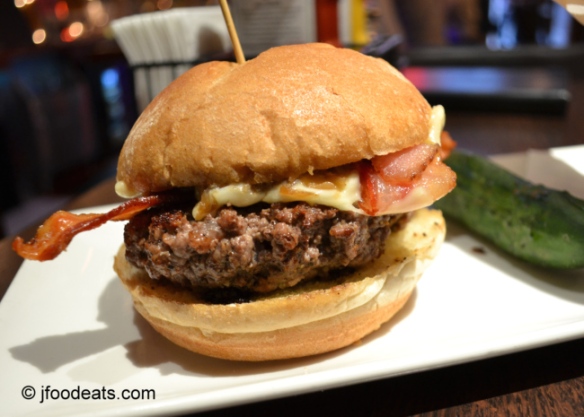 I was pretty excited to try Plan B, a Connecticut based chain with six locations, the newest in Stamford, with the motto of 100% humanely raised and serving aged chuck that is ground on premises. The menu contains over 20 combinations of burgers, almost 50 varieties of bottled craft beers and tons of bourbon choices…does the B stand for burger, beer or bourbon? The space is ultra-cool with tungsten lights dangling from the tin ceiling over wooden booths and tables. There are two separate dining areas, a family-friendly area to one side and a bar with TVs to hang with buddies and watch the ballgame. Plan B had the makings for a total bonanza.

A woody pub-styled entree way greets you with three large blackboards displaying bourbon and beer specials plus the “burger of the day,” which on one occasion was a beef patty stuffed with mashed potatoes, bacon and cheese – I would need a lot of the other “B”s to order that burger. Half of the regular menu combinations focus on beef burgers while the other half includes lobster, salmon, portabella mushroom, chicken, pork or turkey as the main ingredient. The beef combo that caught this carnivore’s eye was the “Bacon Cheese” – American cheese, bacon, caramelized onions and garlic mayo… basic shoestring fries or a salad included or ten other sides are available for a surcharge. Surprisingly only two levels of doneness are offered, “Some Pink” or “No Pink,” but the server whispered that rare or well done was also available. A “rare Bacon Cheese” for me and keep it simple with some shoestrings.

Patty #1 arrived and the doneness was none of the above, the interior was totally raw and the fries were undercooked, still a bit crunchy on the inside. So I asked the server for a re-fire and I ordered “Some Pink” for Patty #2.

Patty #2 had a great char, some melted American cheese, a couple of slices of bacon and a mound of onions, accompanied by a fresh cone of fries. It looked much better…but looks can be deceiving. The meat was juicy but almost flavorless… not a rich beefy flavor but a watery wetness and the saltiness on the exterior was over the top. The grind was incredibly loose, too loose, and each bite caused a piece of the meat to fall out of the other side. And the companion ingredients, well…the bacon was incredibly overcooked, stiff and hard, maybe a leftover from the previous day, and packed an additional wallop of salt. The “caramelized” onions weren’t good at all…maybe boiled and quickly grilled for some crispiness, with very little oniony flavor. As much as I liked the flavor of the sweet and buttery bun it just didn’t hold together, it kept falling apart with the meat pieces. The fries were again undercooked, still a little hard on the interior. Overall it was a disappointing experience. Maybe it was just a bad day since it was Sunday lunch, so a second visit was in the cards. 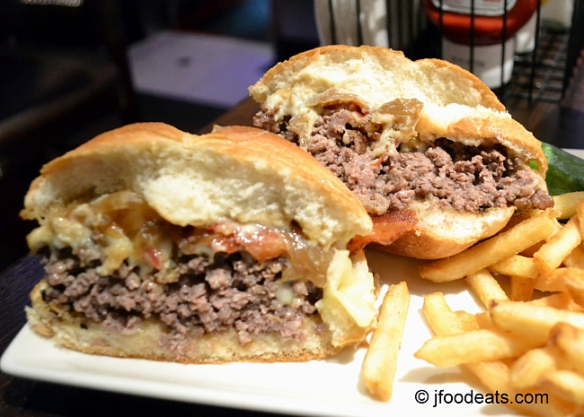 Round B at Plan B was a little better. Patty #3 was again “Some Pink Bacon Cheese” but arrived beyond well-done. When the manager noticed, he apologized and swiped it from the table…so onto Patty #4, which was again overcooked, to medium-well. The taste of Patty #4 was disappointing – some of the bites were tasteless and watery while others whacked me in the forehead with overwhelming saltiness. I was now as done as the meat. There was some good news…the fries were very good, they were crispy on the exterior, moist on the inside and properly salted and the caramelized onions were delicious with a soft and buttery texture with good oniony flavor. The bacon was fresh and better prepared, but the saltiness level was déjà vu…overpowering and the melted American cheese just couldn’t compete with these other bold flavors. The bun again had difficulty staying together.

After two visits, as much as the space and the service were fantastic, I realize that I am not a fan of Plan B. Most importantly I didn’t like the lacking of beef flavor in the meat, the saltiness was tongue-tingling and the doneness inconsistencies were just too large…four burgers…one raw, one rare, one medium-well, and one beyond well-done. When they nail the fries and caramelized onions these are very good, but they need to upgrade the bun and bacon. There are lots of Plan As in front of this Plan B.