Napa and Company in Stamford has another extraordinary chef, Chef Leonardo Marino, overseeing its award-winning kitchen. Chef Leo is slowly modifying the menu to showcase his commitment of using exceptional ingredients to highlight their natural flavors. Three weeks after assuming Napa’s Executive Chef position, CTbites sat with Chef Leo for this “Behind the Scenes,” review, discussed his passion for food and sampled several of his recently premiered dishes.

Chef Leo’s devotion to cooking started at an early age as he assisted his mother and aunt in the kitchen; they inspired him to pursue a culinary education.  After attending the Culinary Institute of America, his philosophy of accentuating the natural flavors was further influenced in the kitchens of some of America’s greatest chefs. While working as the Lead Sous Chef for Eric Ripert at Le Bernardin, Ripert asked him to relocate to Washington DC to take the reins of Chef de Cuisine at Westend Bistro by Eric Ripert. Chef Leo returned to New York in 2009 and joined David Bouley at both Bouley and as the Chef of Bouley Upstairs. In 2010 he joined Jean George Vongerichten, first as the Executive Sous Chef at his flagship restaurant, Jean George, and subsequently as the Executive Sous Chef at The Mark Restaurant by Jean George. After working with all of these legendary chefs, Chef Leo commented, “My mother and my aunt are two of the best chefs,” but he quickly added, “…in addition to Eric and Jean George.”

The first dish was a delightful tomato gazpacho. Chef Leo’s version began with a

mound of baby heirloom tomatoes, Marcona almonds, basil and sliced strawberries, all topped with a mini-grilled cheese. The soup, which was comprised of traditional cucumbers, red peppers with just a touch of diced Serrano chili to give the dish a little spiciness, was then slowly poured into the dish. The bright flavors of the tomatoes were perfectly accented by the cucumbers, red peppers and the Serrano chili; and the mini-grilled cheese was both a delicious and fun addition. I really enjoyed this dish as a light start to the meal for both the crisp combinations of flavors as well as its varying textures.

The second dish was a remarkable salad and my favorite of those that I tasted;

heirloom tomatoes, burrata, grilled country bread, white balsamic gelee and green and purple basil. The tomato season started early this year and Chef Leo is taking full advantage of the delectable and diverse varieties that are currently available. No less than five different varieties of heirloom tomatoes were served. In addition, the imported burrata was one of the most delicious and creamy burratas that I have tasted. The white balsamic gelee brought a delightful and interesting flavor to the dish and it was refreshingly new to my palate. Lastly, the grilled bread brought a wonderful crunchy texture. This dish would work perfectly as a light lunch or a delicious start to a dinner.

The next dish was a fried, poached duck egg with crispy romaine lettuce, shaved broad beans, and surrounded by a drizzle of house-made green goddess dressing.  Yes, 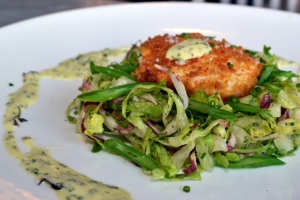 green goddess dressing. Chef Leo explained his fond memories of the dressing and he thought it would perfectly balance the flavors of the romaine and beans. When the dish was presented, Chef Leo cut into the egg and the yolk gently oozed over the lettuce and created a luscious creaminess. He explained that he first poached the egg, then coated the poached egg with panko, and fried the coated egg to create a crispy exterior and a creamy interior. He also mentioned that he added a surprise ingredient to the egg, a touch of harissa to give just a hint of spiciness to the dish.

cheese, balsamic vinaigrette and chives. This simple salad delivered fantastic flavors. The Port Reyes, with its medium pungency cheese complemented the slight bitterness of the endive, and when combined with the deep flavors of the balsamic vinaigrette created a delightful and perfectly balanced salad.

meat, and then slowly braised the duck before searing for a second time to crisp the skin. The duck meat in Chef Leo’s version was cooked to medium, which he believes produces a more tender product. After tasting this dish I fully agree; the duck meat was tender and full of flavor. The accompaniments to the duck were delicious. The candy stripe beets, one of my favorite varieties, worked extraordinarily well with the sweetness of the plums and strawberries, while the baby turnips and the chanterelles added a wonderful, deep earthy flavor.

Chef Leo saved my favorite dish of the day for last; a pappardelle with wild mushrooms, Parmesan cheese and topped with a light mushroom foam. The pasta was perfectly 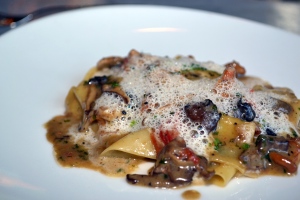 cooked and then tossed with a sauce comprised of mushroom stock, crème fraiche and a touch of Parmesan Reggiano. The dish included a variety of wild mushrooms including chanterelles and shitakes (morels may be included in the near future). The dish was finished with a bit of foamed mushroom sauce. The earthiness of the mushrooms was delicious. The flavors of each of the numerous mushroom varieties brought a wonderful earthiness to this dish and the foam accentuated the deep mushroom flavors. I would highly recommend this dish to every mushroom enthusiast.

Chef Leo Marino is slowly placing his philosophy of fresh flavors onto the Napa menu. As he stated, “The soul of my mother is in all of my food.” After sampling several of his creations, I am extremely excited about the direction that Chef Leo will take the exquisite food at one of my favorite restaurants in Fairfield County.

Originally reviewed by Jeff “jfood” Schlesinger on www.ctbites.com on July 29, 2012